There is a weed.  A really weedy weed that has stalks as weak as juliennes of cooked carrot.  Bend it and it snaps.  It has no thorns or stings to protect it.  It is only an annual so dies every winter.  It is easily pulled from the ground due to it only putting down shallow roots.  In Great Britain, it is a foreigner, thousands of miles from home, so it is out of its natural habitat.  Yet it is going to wipe out our rivers' populations of native, riparian plants and by so doing kill millions of baby trout every winter unless something is done to prevent it.

What is this weed?  If it is so weak, how can it possibly do so much harm?

It is Himalayan Balsam.  An inconvenient truth is that it has been brought to these shores and allowed to spread into the wild.  Another is that it makes an abundance of seed that will grow in almost any substrate in the most unpromising conditions. 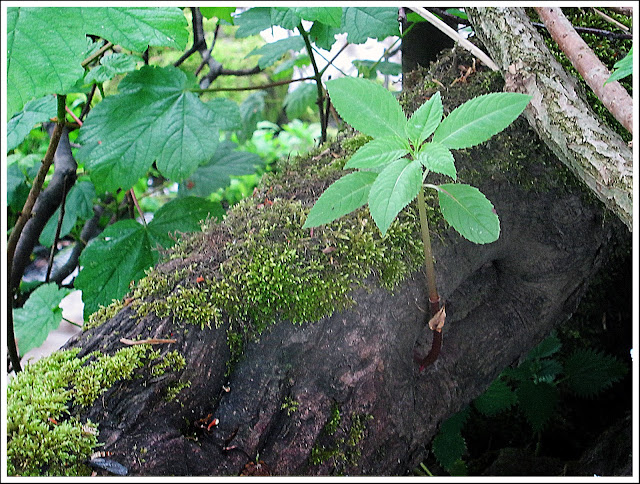 This example is growing in a tiny pocket of mossy loam on the side of a tree.

It sows its own seed by firing them off with almost the same range as a Diana BB gun.  Flinging seeds across a road, to find new ground to grow in, is no problem to the Himalayan Balsam. 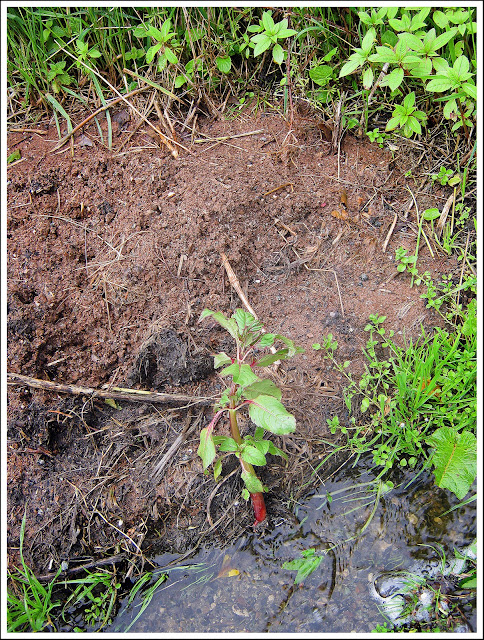 On this side of a road here is a plant growing in a salt pile.  The salt is placed there because modern cars and modern motorists can't drive properly in the snow.  This plant actually seems to be doing very well on its saline base.  Across the road there are already some seedlings taking hold...

How can such a weedy thing do harm?

It does it by the exuberance of its seed, it's speed at growing above the native plants, the shading of its leaves kills the natives through lack of light and then, come winter, it dies and leaves the earth bare for its seeds to take over more easily.  By dying away and leaving bare soil to be washed into the rivers and streams where it blinds the gravel and suffocates the trout eggs.

What is the remedy?  There are two remedies, one immediate and very effective, the other needs money before we can have it and clear this alien invasive from our shores once and for all.

The immediate remedy is to pull it out of the ground and leave it to die as its roots dry out.  This anyone can do and any angler will find pulling 100 plants is a quick and easy task of only a few minutes.  The time to pull it is right now before it has chance to flower and send its seeds pinging out all around it to maintain its invasion.  Get all the plants out and the following year there will be fewer plants to pull up as the seed will be at least a year old. The year after that there will be even fewer.  Keep this up for five years, the plant is gone and the native plants will re-establish themselves and the bare soil will be covered and protected by roots.  Erosion of the soil will be reduced.  The trout eggs will no longer be killed by suffocation.

The other, permanent remedy does not exist yet.  This needs the chemical industry to develop a selective weedkiller that kills Himalayan Balsam and nothing else.  This would cost a lot, millions probably.  Where should the money come from?  Well anglers for a start.  It's no good expecting anyone else to do it for us.  They won't.  The Environment Agency position is "It's endemic now.  There is nothing to be done about it!"  Wildlife Trusts often have a similar position, sometimes even worse with the silly, "Well the bees like the flowers..." remark, as if native plants are anathema to bees!  Unfortunately the bees tend to bypass native plants to get to the extra sugar content of the Himalayan Balsam flowers and the natives suffer even more.  Maybe if the good folk at the RSPB realised that Himalayan Balsam has a negative effect on native birdlife some money might be made available from its massive reserves?  You can see why the ideal solution will probably never exist.

It's because it doesn't immediately help them catch more fish!

NOW THAT IS A REALLY INCONVENIENT TRUTH!