Dan is this year's winner of the Wild Trout Trust auction lot for a day in Duck Holds Wood.  He was hoping that he might be able to catch one of the Wild Rainbow Trout, for which the Derbyshire Wye is justly famous.    Suffice it to say he was successful and with good reason.  Apart from a ridiculous hat that might have been designed to scare fish away, he was stealthy, observant and careful with his fishing.  His casting was good and seemed to get better as the day went on.

It was good to be out today.  Mayflies were being taken.  Fish were prepared to rise.  The rain stopped.  I had the good company of a guest who "got it" with regard to Duck Holds Wood and the river that curls its way through it.  Going home time came rather suddenly, we both wondered where the time had gone to, which is a sure sign we were having fun!

"Are we nearly there yet?"

Any child taken by car to somewhere exciting knows this question (and its variants).  Surely, we have all asked it?  Going dry fly fishing in Derbyshire, at this time, has something of the same feeling to it.  "Are we nearly there yet?"  If you'd asked me this any time up to today I would have had to answer "Not yet!"  The summer is not yet truly upon us.  The Hawthorn flies are still around and figuring a la Carte. The Blue Winged Olives are appearing now in sufficient numbers to interest the odd hungry trout but not in numbers to get the whole river full of fish awake to them.  The Drake are showing but in singleton appearances and yes the trout will eat one occasionally.  All of this is encouraging but there has been that definite feeling that we were NOT nearly there yet.


Today we rounded a corner.  Flowers are certainly bringing their beauty to the banks, the surrounding woods and the meadows.
However, marginal plants are still short and only the low kneeling or sitting angler has any decent chance of real success.  Anything other than this stealthy approach leads to bow waves and fish leaving their equivalent to "Footprints in the Sands of Time..."

Nevertheless, your faithful correspondent (and his small black assistant), by putting the three basic principles to work, was able to enjoy a very decent afternoon's Sport.  Hiding and sitting stealthily behind what little cover there was, observing carefully and making sure that the fly was going to be cast where the fish were, all added up to some satisfying successes.  It is all very encouraging.


So are we really nearly there?  Where and when is summer coming?  When can we expect the furious festivities with the Drake?  After today I'd say any day now.  We ARE "nearly there"!

A fishing friend, Glen Pointon, has the legend "Living the Dream" running through his entire being.  Just like the legend "BLACKPOOL" is to be found all the way through pink sticks of rock from that famous seaside place, noted for fresh air and fun.

Look at his blog and you will see that he pursues his dream proactively...

Your faithful blogger's dream is pursued in a more leisurely fashion.  It is a simple dream, that where the river and its inhabitants come first, we all win.  Duck Holds Wood and the short length of the Derbyshire Wye that it straddles, is a place where that dream has been lived for some years now.  On assuming the tenancy, long sessions of wandering with Warren, the Head River Keeper, by the water and through the land, at the same time incorporating hours of serious thought and intense conversation, led to various decisions about the management of this very special place.
﻿
Duck Holds Wood was to be a gently exploited fishery, with light fishing pressure and an even lighter hand on the management side.  An early piece of major work was the planting of Hawthorn and Blackthorn to grow into hedges.  These would provide habitat and make corridors for small birds, mammals and reptiles to move around under cover.  Today these are healthy avenues of bushes, rather than hedgerows, that in a year or so can be "laid" to create the hedgerows.  They are already contributing, on a grand scale, to the increase in life within Duck Holds Wood.  The Hawthorn flies today were making the most of early pollen supplies in the tiny hawthorn flowers.  The numbers of Hawthorn flies in, on, around and over the Hawthorn bushes were beyond any ever experienced by either Warren or yours truly.  These flies will of course be important to the fish (and fly fishers) but their bounteous presence will also be much exploited by the swallows and other insectivorous birds.  Have a peep at these snaps to get an idea of how prolific the Hawthorn flies have been...
﻿﻿
Another policy for Duck Holds Wood is that woody debris (both large and small) usually belongs in the river and not on a bonfire.  This has led to more and more places for fish to escape to when the Cormorants and Goosanders raid and to more places where individual fish can hold station, in relative safety, to feed on the dainty victuals the Mother river brings to them by day and by night.  Here are some snaps showing the potential of small and large woody debris.  Imagine the cover created once the leaves are out!


Over the years the old poplar plantation, which formed Duck Holds Wood initially, is being felled by the winter and spring gales.  This has opened up a new opportunity to add another type of habitat to this dream place.  We can create meadows in the cleared spaces.  Maybe in a few more years it will be possible to report on them and their contribution, if any, to the life in and around Duck Holds Wood.

Guess who will be deploying Charles Cotton's Black Fly shortly... 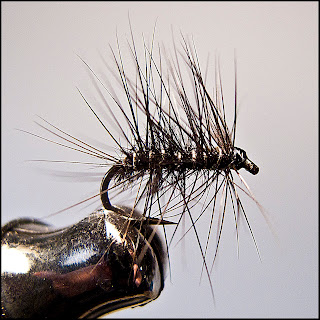