No fishing on Saturday, instead advantage of the sunshine was grabbed with a slog down river laden with apparatus and accompanied by the most patient photographer's assistant the river Wye has ever yet seen.

It dawned on your faithful correspondent that you might like to have a peep at some of what is involved when making photographs in the olde worlde way...

The light was fantastic and hopefully the four exposures made on very expensive 8x10 sheets of colour film might be good enough to show you all at a later date.

If the sunshine keeps up and the North and North Easterly winds clear off, we might find the year catches up to where it really ought to be by now...

The summer is coming at last and colours are now intensifying wheresoever the angler casts his eyes.

The yellow of the Lesser Celandine has quickly been overtaken by the bigger yolks of the Dandelion and soon they will be surpassed by other wildflowers of the meads...

Whilst by the water's edge, Forget-me-not takes full advantage of its early appearance to out compete the marginal plants, which are still three or four weeks away from crowding out its little blue flowers.

Forgive the quality of the pictures.  Monochrome is so much easier to work with than colour.  Transparency film looks wonderful in the hand and on a lightbox but it is the Devil itself to scan well.  I may well be changing film type if I don't get the hang of it soon...

A cool wind and thick cloud made the day quite unsuitable for Bibio marci today but "Wishful Thinking" had me start with a Charles Cotton's Black Fly, even though I had seen no Hawthorn Flies at all on our wander down river to Ogden Island.  A lucky cast and a silly mistake by a trout in the eddy at the tail of the long Reed Mace beds below Meaden almost convinced me to persevere with the little black fly.  However, as Henry and his pal, your faithful blogger, settled among the Fleur de Lys at the tail of Ogden Island it should have been instantly clear that this fly was NOT what the fish  all around us wanted!

Sitting down to hide in the "Swords of Green", we could see that there was a very vigorous rise going on.  Everywhere we looked there were fish rising steadily.  I'd guess that each fish was rising at about six rises to the minute.  A glorious sight, especially when considering what a late starting year we are having.  The season is still about six weeks late.  Anyway that little black fly, which normally fills me with such confidence, had to come off.  What to put on in its stead?


Most of the flies were in fact Blue Wiged Olives but sprinkled amongst them were Large Dark Olives and some other olives of a pale sandy appearance.  The decision was made to use a Pheasant Tail dry fly with a pale honey dun hackle and tail.  In fact the fly selected was the one tied for you in the Step-By-Step last year.

It was immediately proven to be the very fly for the task, as a lovely young wild brown trout, with red spots and white leading edges to its pelvic fins, snaffled it at the first chuck.

Henry and his pal then worked our way slowly upstream, revelling in the fine Sport that came to us simply by being there, being stealthy all the time, observing carefully and casting as neatly as possible to "where the fish are".  It was a big reward for little effort.  In the end we moved on to the weirpool at Black Barn as Henry was getting a bit cold and bored having been ordered out of the water after he tried to "help" as all the fish were once again escaping as soon as his pal had taken that fly thing out.  He must wonder how I get to eat...

At Black Barn the light was making the river into a silvered sheet.  The fly was invisible to the angler!  So that ploy of breaking the "match the hatch" rule was tried.  Charles Cotton's Black Fly was reinstated and the Pheasant Tail demoted to the hat band to dry.  The ploy worked with a couple of strong rainbow trout heaving the rod over as if they were ninety pound Tarpon instead of nine ounce bejewelled torpedoes!

It became clear that the cold wind, Henry's recent haircut, his excursional soakings and sitting doing nowt was having its effect on him.. The Cocker Spaniel needed to move about a bit, so we set off upriver towards home. On the way we paused in the recreation ground to watch more fish rising, met up with Warren, exchanged pleasantries, met Alisdair, another good friend with Henry's half sister, Purdy, as his outdoor companion!  Before we knew it, we were back at the garden door and home. It had been a good day.

Maybe the Hawthorn Fly will be out later this week if the weather warms up a little, or is that just more "Wishful Thinking"?

A river is a dynamic thing if it is allowed to be so.  Where does the gravel come from?  It comes from erosion of the banks.  Uninhibited erosion, such as that which happens in winter on rivers with no perennial plant roots to protect their banks. is a very bad thing for the health of the river.  That alien annual, Himalayan Balsam, out competes native perennials and takes over the banks of many British rivers.  The balsam plant, when it has finished shooting its seeds all around it to a distance of as much as thirty feet, dies and because it is very shallow rooted is washed away at the very first winter flood, leaving the soil bare and unprotected.  Every instance of high water from them on washes the bank away.  The farmer loses land, the gravels get blinded with soil, the eggs are suffocated and the angler ends up with no wild trout and no native marginal plants to enjoy.

But there is another, beneficial, type of erosion.  This happens where root protected banks are slowly undercut by the river, so the gravel, deposited by the glaciers thousands of years ago, is gradually released into the river bed and is then graded by the currents to make clean, productive beds for fish to spawn in, fly larvae to live in and Ranunculus fluitans to set root in...

This beneficial erosion can spontaneously start anywhere where the current may be newly directed to the bank.  Such new direction often comes from something new ending up in the river and, in Duck Holds Wood that something new is usually a tree, or part of a tree.  Here's a newcomer.

This willow fell years ago but, until this winter, it had for the most part stayed out of the water.  This winter something caused it to complete its fall.  I have no doubt that it will change the dynamic of the Derbyshire Wye for a few yards at least and it will be interesting to see if new gravel is scoured out and deposited in the downstream pool, which, as an acknowledgement to the constant symphony of birds singing away round here on most days, is known as "the Song Room".  This finally-fallen willow has already changed the dynamic of your faithfull blogger's fly box.  It took at least half a dozen casts and one forced fly replacement before one of the brown trout living right in the middle of this picture made that essential mistake we all pray for...

On Being a Luddite!

So I promised you a look at the snap I made yesterday whilst Henry was patiently waiting. 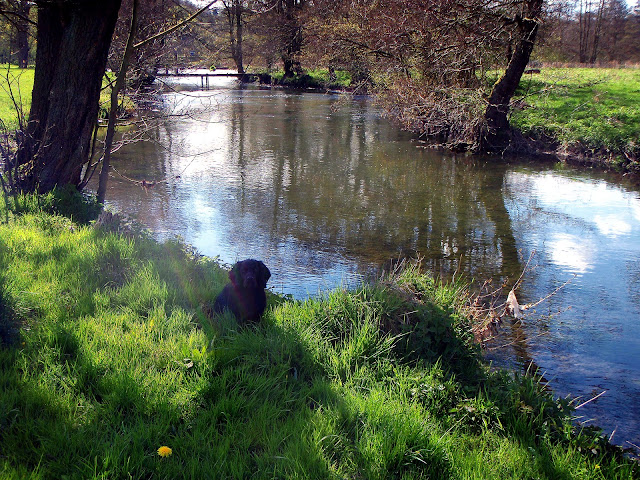 That was a foolish thing to do.  I love film but a digital image would have shown me in the camera there and then that I had flare in the photograph and I would have made another exposure to correct it.  With film we have to wait to see the result and, although I knew it was a risky exposure to make being contre jour and therefore susceptible to unpredictable effects such as flare, I went ahead and said you would get to see it...

Here it is, not good enough and I will have to see if another can be made some time in future.

I still love the results that can be had with film but this was a failure!

One month ago today we had a look at a new bit of land that was beginning to appear.  It looked like this... 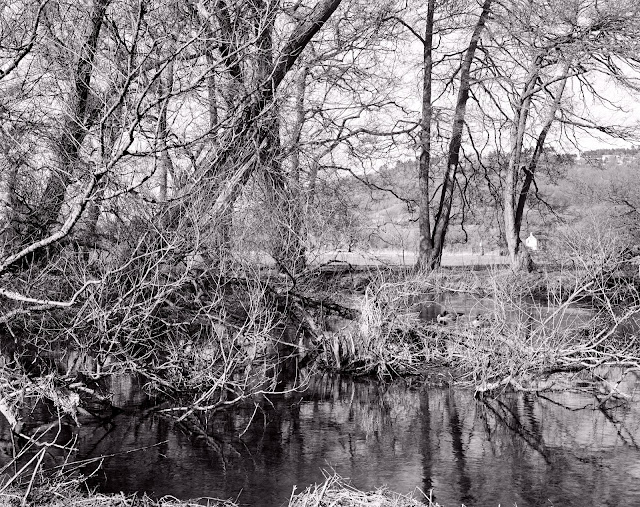 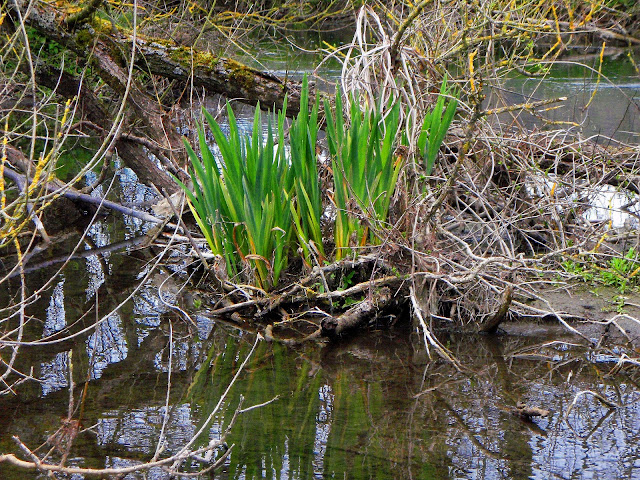 And the land being created under and around them is growing nicely too...
﻿ 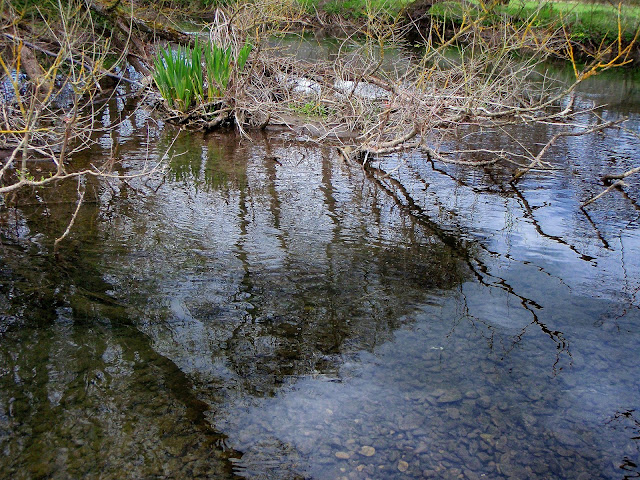 Henry found today somewhat mixed.  His pal took him fishing, which he loves... but... his pal also kept stopping the fishing and then doing that strange thing where he fiddles about with a three legged device and peers through the thing he puts on top of it.  This is very boring and the only thing he can do is either sit "patiently waiting" or wander off for a few yards and see what he can find.  (Just one ball today.)

Henry patiently waiting...  You will be able to see the photograph that was exposed, while he waited, in couple of days or so as it has yet to be developed.
The fish were very co-operative today and because this lovely section of the Derbyshire Wye flows through flat land, it winds and twists enough for the angler to be able to find places where the wind is a help rather than a hindrance.  Just as well because it didn't half blow a lot!  It felt like All Fools' Day usually feels, all of Nature seems to be conspiring to make us think that it still is......One Month Ago!
Regular Rod
Posted by Regular Rod at 23:19 4 comments: