The angler was casting perfectly onto the conveyor belt that carried rows and rows of Sherry Spinners over the line of feeding trout.  The water was low and some stones between the angler and his quarry were exposed.  The fish were rising well and the fly was being taken when it arrived, beautifully presented, but somehow they were not being hooked.  Just then one of the exposed stones snagged the line and, on retrieving, the fly caught on the stone.  By a careful manipulation, that reversed the direction the fly had been travelling in when it met the stone, the fly was retrieved.

"Oh (expletive deleted)!  The hook point is broken off!"

Hmm...  All those perfect casts and excellent presentations wasted.  No wonder the fish were not getting hooked! 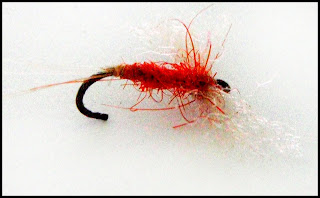 So if you make a perfect strike and the fish isn't hooked...  Just pull in the fly and check the condition of the hook.  You won't regret it, ever!

The photograph may give away a few "secrets" but that's what this blog is for isn't it?

The results of being a "visual display" on the Haddon Estate stand at this year's Game Fair
Posted by Regular Rod at 23:20 4 comments:

A few hours on a favourite tributary with a new friend

A mutual friend made the arrangements.  His pal Tim needed a new floating line in mahogany brown.  The friend thought a few hours fishing wouldn't go amiss for Tim, I agreed.

So meeting on Monday at 18:00 ish (it is a work day after all) we trundled down to the river.  I lent him a rod and a reel loaded with a brown weight forward line.  The river is low, the fish are wary.  Tim was to be introduced into the toe-to-toe, creeping, kneeling and sitting style that fishing the dry fly on here demands.

There was no major event in way of fly life.  A few Blue Winged Olives were evident but there were sedge flies too.

Tim had on a Double Badger that seems to be just the thing for when the fish are NOT preoccupied on a particular food item.

So it proved.  A splendid three hours were enjoyed by the pair of us as we fished our way upstream as a pair, taking turns at casting to the fish.

Tim found skills he was not sure that he had. 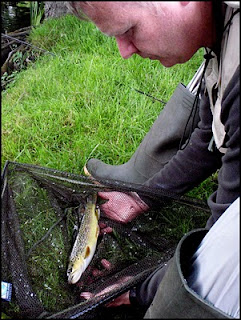 Catching this fish needed a careful cast slotted sideways between overhanging branches of a sycamore and upreaching seed heads of the grass that had not been shorn by grazing sheep.  I reckon Tim had a mid-air corridor, no more than a couple of feet high, to keep his back cast inside.  A couple of inches too high or low and he would have lost his fly or end up scaring the trout in attempts to recover the fly.
This perfect wild brown trout, which had never seen the hand of man before, was a just reward for his skill.

Boys' Night out on the Town (Water) 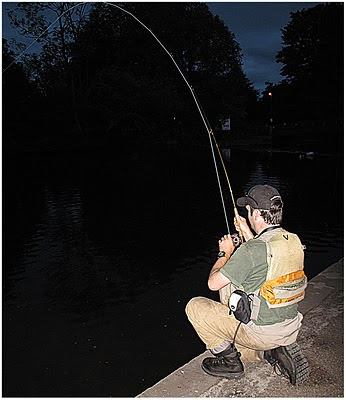 One of the few places where you can show yourself to the fish and still have success is the Town Water in Bakewell on the Haddon Estate's day ticket water stretch of the Derbyshire Wye. Enthusiasts, for obvious reasons, fish the Town Water at night. The crowds have dispersed. No more bread is being thrown in for the ducks and fish to compete over. The fish, gorged on carbohydrates all day have to balance up their diet by eating protein all night. The abundant fly life makes this a viable lifestyle so the fish grow to amazing sizes.
The little Sherry Spinners return on many summer evenings in enormous quantities. On those evenings we simply use the artificial designed to represent these flies as they lay cruciform on the surface having finally used up their ration of energy in the final throes of egg laying on the water's surface. 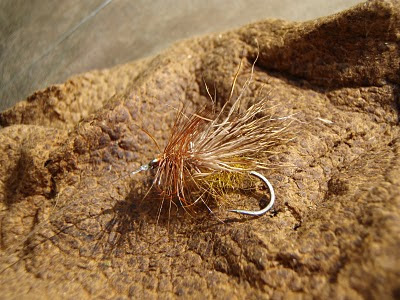 Sometimes the sedge fly is the predominant fly on the fishes' menu. The sedge fly is a much easier fly to deploy than the Sherry Spinner. It need not drift absolutely drag free. Sedges skitter about and so it might be an advantage if your artificial does likewise. The fly is larger than the spinner, so you can use a heavier tippet and that might be very important when you hook what might be a double figure fish - in the dark...
On Sunday there was nearly as much pleasure to be had watching a member of the Peacock Fly Fishing Club and his four mates, who had joined him on day tickets, fishing the sedge fly and really getting it right. 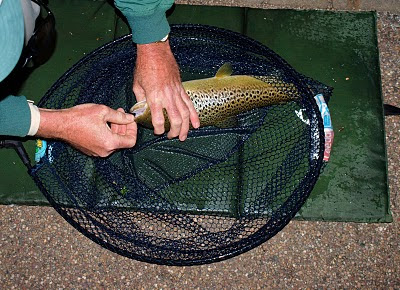 The long handled landing net and the unhooking mat were in constant demand. They fished until it was simply too dark to see the flies anymore, in despite of the lights from the Italian restaurant across the river giving some illumination on the proceedings. They all went home very happy, which is, after all, exactly how anglers should always be on their return from an evening on the river... 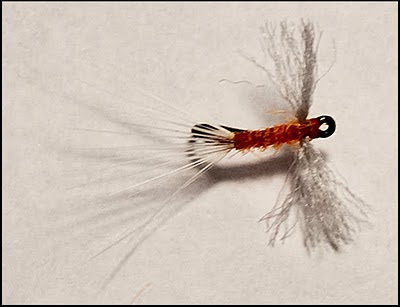 The method of fishing the Sherry Spinner is simply as follows:
Next time we will look at one of the other types of flies that prove important to the fish and the angler at dawn and dusk. In the meantime if you have any questions or comments don't hesitate to post them.
Regular Rod
Posted by Regular Rod at 11:20 2 comments: