Henry is an old dog now but he still enjoys a fishing trip.  Instead of walking the few miles there and back to the lower beats of the Derbyshire Wye, we now take the car.

Yesterday, the Third of July, we started fishing in the rain at around 18:00 hours.  We only fished for an hour or so, before a violent, and very noisy, electric storm sent us away, but not before we scored a Derbyshire Wye McNab of a rainbow trout, a brown trout and a grayling! 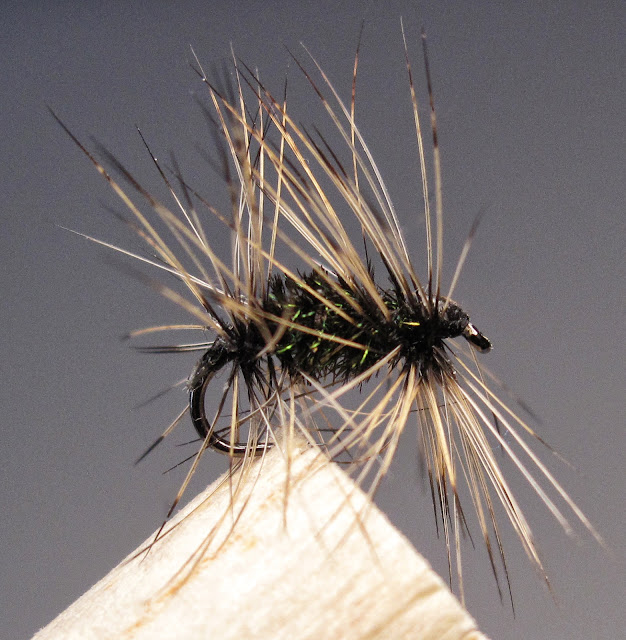 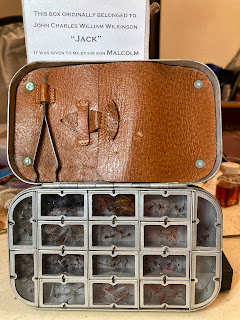 All three fish came to a Double Badger carefully selected from "Jack's Box", and in so doing, although we had never met, it made me think of him, to wonder what he might have liked, and what we might have discussed by this, justly famous, dry fly fishing water.  In the imaginary conversation I had to check the telephone to ascertain the date.  My word, Third of July!  I must remember to wish the good folk in the USA a "very happy Fourth of July"!

So have a great day and try to get some fishing done in celebration of your Nation's birth!

Another Derbyshire Fly Box is (re) Born

Well it took a few sessions, but that lovely old Richard Wheatley dry fly box now has every compartment occupied by families of new tenants.  During the tying sessions, immersing myself in Italian via Radio Garden, it became clear that to simply use this box, as if I'd bought it new, was not going to be good enough.  This had been a fellow dry fly angler's box.  Looking at what was left of his flies, even though the insects had certainly enjoyed some very festive banquets, it was just possible to discern what some of these dry flies had been.  This brought me to the conclusion that he had fished rivers in Wales and the North West of England.  Somehow this made him real.  We had never met, but there was still a connection...

I contacted my pal, who had been so kind as to pass on this box, and some other fly fishing items of his late father's.

"What was your Dads' name?"

"John Charles William Wilkinson.  He was known to all as "Jack"."

"Thank you.  I want to keep a record of him in the fly box."

Well it's more than a thought now.  Jack is duly recorded and every time I reach for my untangling needle, I will see his name.  Henceforth, this box is to be known as "Jack's Box".  It's full of Derbyshire flies in readiness for this season.  I hope he would have approved.

A few years ago a pal, and member of the choir we sang in, very kindly gave me a box of some fly fishing tackle that had been his Dad's. In it, among some other items, was this immaculate traditional Wheatley Dry Fly Box. 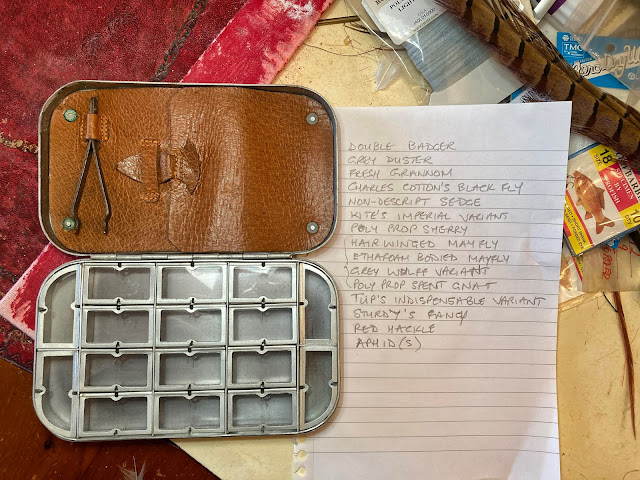 This season, in an attempt to be better organised, I'm going to use it as it should be. The list of flies I need to tie to fill the box for the season is there, roughly in order of priority, and a little in order with what to expect at the start and throughout the season.

Updates to follow, meanwhile I must find my reading glasses!

Let's be careful out there...

Here in the UK we are going to be allowed out soon, just in time for the start of the new season.  Apart from debris dropped by this winter's excellent floods, the rivers round here have benefitted from the lockdown and a reduction in folk dropping litter.  As a resolute "take it home and dispose of it safely" fanatic, this list caught my eye and reminded me of how we can all help and that it is worth our effort. 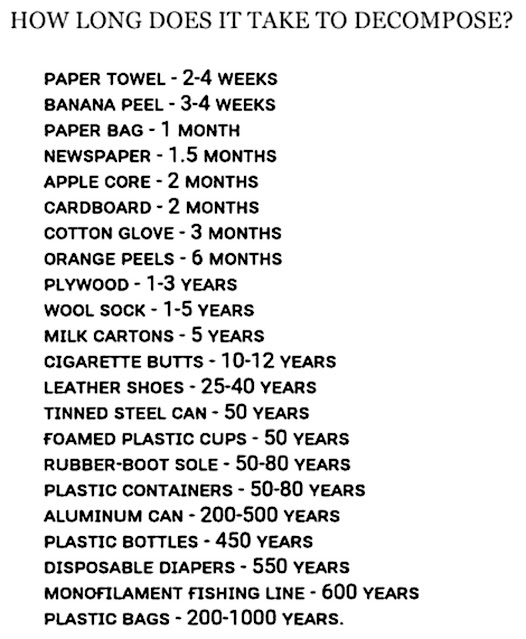 Now back to the fly tying vices with you all.  Don't be found wanting on Opening Day!
Regular Rod