Reasons to be cheerful, part three???

At least seven, rather than three parts to being cheerful yesterday.  This picture post is really an attempt to just begin to explain why fishing on Derbyshire's River Wye is so special.  It is no coincidence that not a single picture of a fish, wishing it was back in the water instead of laid out on the folds of a landing net, is in this mini-series.  Angling, especially angling with the dry fly is NOT just about catching fish, even though it is one of the most effective ways of doing so.  It is surely a communion if the angler is to gain the greatest joy from this noble Sport?

This time of year highlights the point even more so.  Here we are at one of most pleasant times of the English year, our tackle is not cumbersome, we roam freely with only the tiniest of burdens, a light rod, a similarly lightweight landing net, a little bag perhaps with a lightweight raincoat in it, the tackle and the victuals for the day.  The leaves are nearly all fully out covering lots of hidy holes for our quarry.  The fish are at their most secure now with food aplenty drifting into each fish's chosen feeding station. 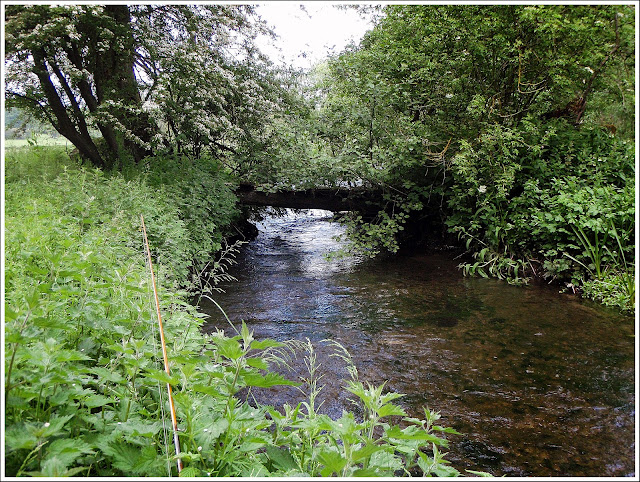 Here's a cracker to start the day.  Twenty minutes and one nice brown trout after this snap was taken you nearly lost this blogger as he slipped off that little log bridge landing inelegantly astride it.  Henry wondered what the Devil was going on as his best friend struggled to maintain consciousness and regain the ability to breathe, before clambering back onto the bridge to finish crossing to the little island on the right of the snap.  No real harm done.  Personally speaking, procreation has ceased to be a life mission for some time now anyway!

After some productive fiddling about round these little islands, some of which are no longer accessible to the angler as their bridges have been swept away in the winter floods, it was time to wander slowly upriver and send the mayfly over to explore these wonderful hidy holes... 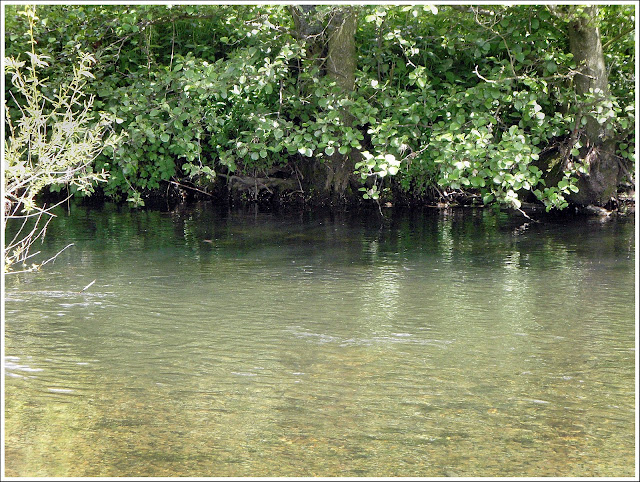 A long chuck that needed to collapse inside this hidy hole so the leader didn't drag the fly for a few seconds, just long enough to convince another brown trout into making the desired mistake. 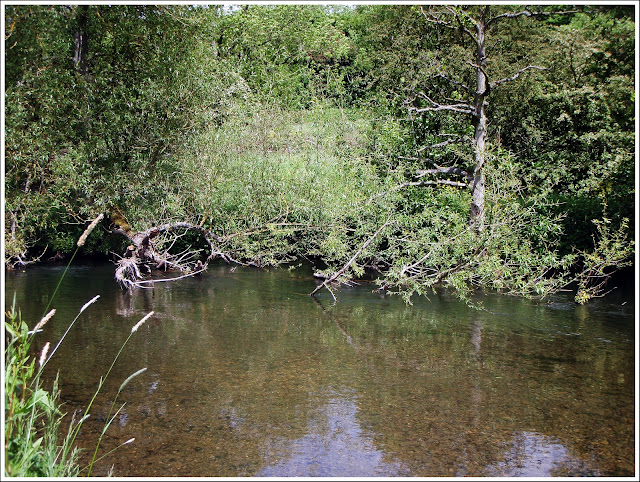 These two spots among these branches needed the rearmost fish to be caught first and quickly heaved out into the open water to prevent certain disaster then it was time to winkle out the frontmost fish in a similarly rude manner.  These were both wild rainbow trout. 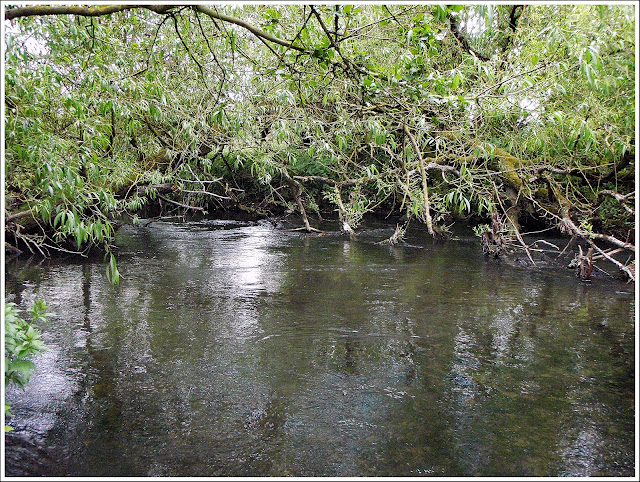 Only a matter of ten yards or so further upriver is a tangle that each year seems to get more and more difficult to deal with.  Not least of the difficulty is actually squeezing into a position where a cast might be made.  It spelt defeat for the angler this year.  Not to worry though as, maybe this next winter it will be altered once again by the floods, especially if a heavy tree is borne down here like a medieval battering ram.  The highlight here was seeing a willow warbler carefully examining under every leaf to find mayflies waiting to become spinners and, having found them, snaffling each one instantly. 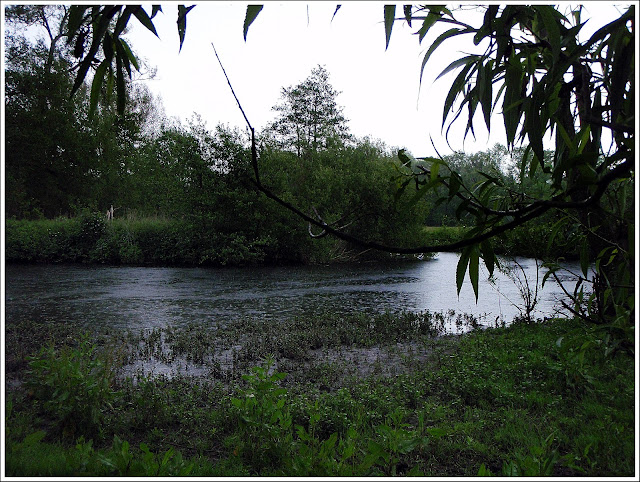 Then the rain came a little heavier.  Henry was glad we found shelter under the leaning trunk of an ancient willow.

This fellow too was sheltering under a broad blade of grass.  He had cleverly positioned himself vertically to reduce the chances of being bombed by a big raindrop.  Look closely and you can see that he has turned his head to use both eyes to check out the potential threat of this great one-eyed silver monster that was peering at him (in super macro mode). He sat it out and the "threat" went away. 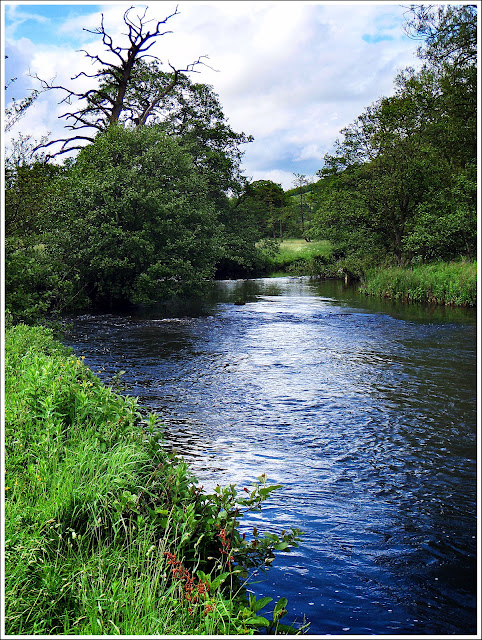 The rain stopped.  Later on, working slowly upriver, through a lovely wood and out into the sunshine, the angler is met by this exquisite run that abounds in rainbow trout mid river, brown trout under the trailing edges of the Ranunculus beds and grayling in the glides.  The light was perfect and just out of sight a woodpecker was drumming on that standing dead tree behind the bushy, healthy looking alder tree in the left middle ground of the picture.

Yes it was a good day for fishing and a good day for participation in the beauty of being here, where the angler belongs.  Certainly plenty of reasons to be cheerful...