Today was a lovely day.  Early on, the odd drop of rain for sure, but mainly dry, blue skies with fluffy clouds and a gentle breeze to keep the angler comfortable.  Perfect for Henry to stretch himself after his brief, post operative, enforced reduction in his activities.  By Gum!  He did enjoy himself being the mighty hunter as we moved from one fish ambushing point to another.


We were on the lowest beat of a favourite tributary to the mother river.  It is a gin-clear, limestone spring-fed river that runs over bright gravel.  The fish are feisty in this section.  You can get an idea of how feisty some of them can be by the name of this corner run...  "Hook Straighten Bend"  (Say it out loud quickly...)

Within less than half an hour of starting, your Blogger managed to get the fly caught in one of the overhanging tree branches on the opposite bank.  On this bank there is a fallen tree with root ball on the bank and shattered trunk on the river bed.  It looked like it might make a useful means of reaching the fly, and retrieving it, before it became a bat trap this evening.

Oh Dear!  It's at least a couple of years since your correspondent last fell in.  The tree proved a slippery platform and, even with landing net handle as a walking cane, gravity won.  Fortunately the trajectory into the water was straight down and angler remained upright throughout the incident.  With water up well past the knees it seemed pointless to just get out without achieving the original object of the mission.  Fly was recovered even if dignity was not.  Of course all the fish were, by now, elsewhere... 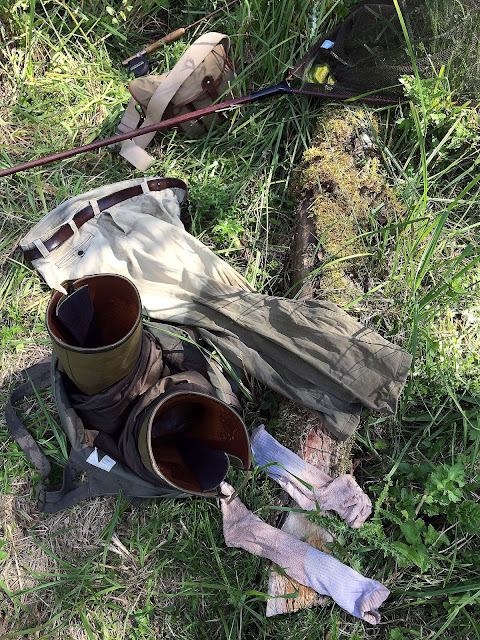 Wellingtons tipped out, trousers and socks removed and wrung out, expletives at a minimum, the angler restored himself to his personal comforts as best he could in the circumstances.  Another, undisturbed ambush point was sought and the day's sport continued.  We even found a rather splendid feather from a heron, perfect for Kite's Imperial. 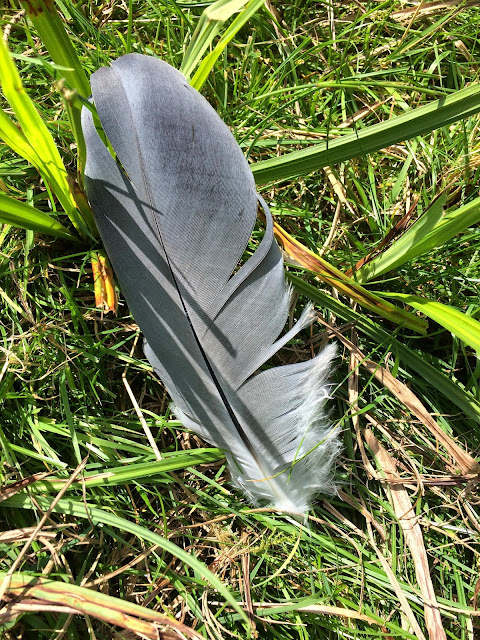 It's hard work on this little river.  The fish are impossible to catch if they know you are there.  It really is a matter of approaching on hands and knees and sitting, or at least kneeling, to fish.  Time flies when you are enjoying yourself, even when somewhat damp.  Operations were ceased at a Baker's Dozen and home to tea around 19:00.  We had a great time.

Henry is back in his high spirits again and, because of that, so is your faithful blogger.