Today we went to Duck Holds Wood.  Sometimes this dry fly fishing can be hard work.  Hard work in that a fair bit of chopping and changing was needed for fish to be tricked into making that mistake we all want them to make.  The first pool had the occasional rise showing.  The water was boisterous so a very visible fly was chosen, the Nondescript Sedge.  It was probably the right fly as there were lots of sedge flies over and on the water.  After a couple of fish it was time to move.  The method had really been more of an exploratory bit of prospecting as the rises were nowhere near four to the minute, the usual signature of confident fish feeding at the surface.

The next pool up is a lovely gliding bit of water that is actually full of snags.  Here the fish were rising very confidently to something small.  No olives were showing so midge was guessed as the main course for this dainty remove.  On with a Sturdy's Fancy, your blogger has given up on the attempts to devise the perfect midge and now reverts to this fly, or else a tiny Grey Duster or even an Aphid but tied with a black body.  The Sturdy's Fancy proved to be ideal and a few more fish came to the net, much to Henry's delight (and mine). 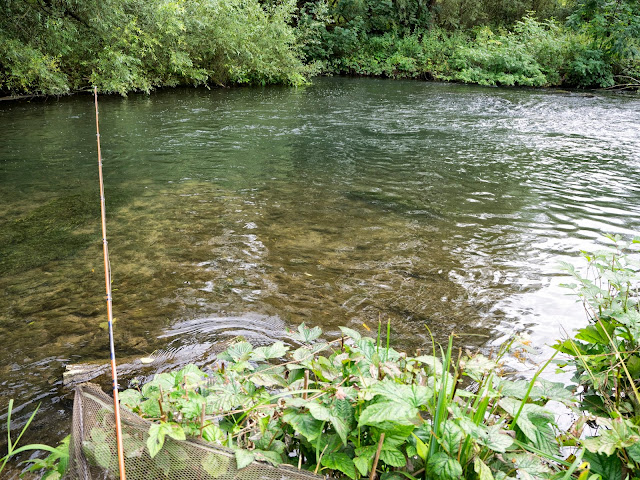 Moving upriver, the fish were back to occasional rises in a lovely run by a veritable thatch of willow.  The tiny fly was ignored.  This time a Double Badger was deployed as there was no real sedge fly activity but the Double Badger hints at so many different types of fly and the fish often fall for it.  So it was here.  This is a lovely pool but it took me four seasons of visits before I ever caught anything here.  The fish were there to be seen but catching them was harder than it should have been.  Now, with a bit of thinking, it is usual to catch at least one fish here.

﻿﻿So it went on, here a gliding pool with fish rising steadily, on with the Sturdy's Fancy.  There some boisterous water with fish either not showing or only rising occasionally, on with the Double Badger.  This was the way, swapping between these two flies and replacing the tippet when it became too short for the work in hand.  It's not really hard work but it could easily have remained undone to the detriment of our prospects today.  Today wasn't one of those, "Try every fly in the box!" days, only three flies were needed.  This wasn't haphazard.  It was necessary because, along these three delightful furlongs, fish behaviour varied today according to the type of water they were living in. 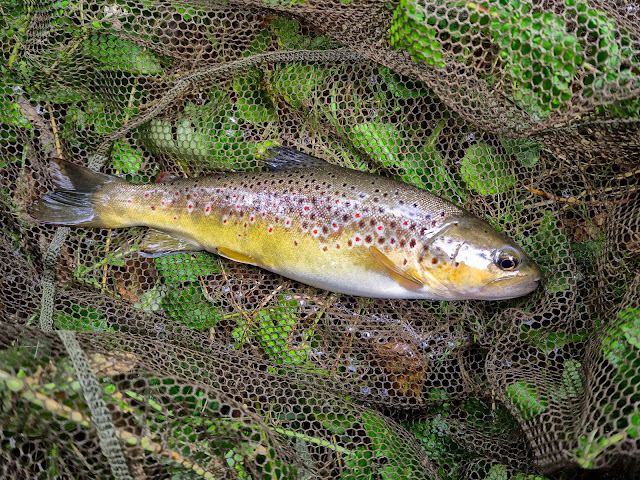 You will be aware that your faithful correspondent hesitates to make photographs of fish these days, preferring to get them back into the river as quickly and as gently as possible.  This trout although not much more than 10 inches long came from a very tricky spot, a place for a boss fish.  A photo ID of it could prove useful in future years.  Those markings will be very easy to recognise.

Of course, on another day, the fish will be all feeding in the same manner over the whole river and dry fly fishing becomes dead easy again with no need for all this chopping and changing at all!