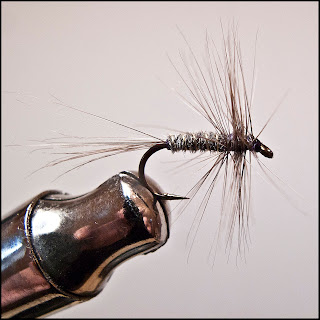 A fascinating evening after only being able to get out at 7.30 p.m.  The fish were eating olives and the Kite's Imperial was the fly of choice and it proved a good choice... 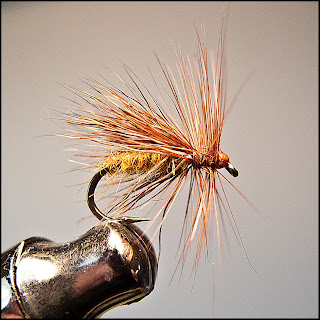 Until the rises changed to vigorous changes of direction when the trout (and grayling) showed the sides of their bodies as they moved rapidly to intercept sedge flies that were all over the river's surface.  Looking upriver one was treated to the sight of dozens of sideways on fish at their feasting.  A good hour with the NDS saw some brisk Sport. 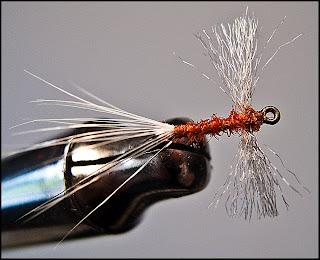 Then in the space of less than five minutes everything changed.  The fish were making those elongated rise forms as they broke the surface first with their noses, then their dorsal fins and then the top of their tail fins, which "always" indicates they are feeding on spinners.  The PPS was put to its usual task and yet more success followed.

So a splendid evening, but there was more to come.  Just as it was getting dark enough to force the polarised glasses off the nose and back into the bag safely in their case, the rises changed again! 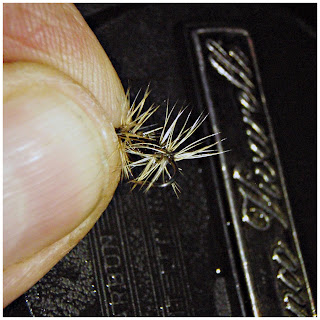 The fish were hanging at an angle and simply pushing themselves up with open mouths to engulf something.  Stop casting!  Look and look into the gloaming and see what is in the air over the water.  Caenis!  Aha!  Off with the PPS and on with a Double Badger.  An old worn out Double Badger if you please!  One was pulled from the hat band, tied on, anointed with floatant and sent on its way to the rather fat brown trout that it was just possible to discern whilst it made impressions of a whale engulfing herring, or anchovies.  Third cast and the worn out Double Badger was on the right space of the conveyor belt.  It was engulfed with the same confidence as the real clumps of tangled Caenis spinners and duns had been.

Tap!  Then all Hell broke loose as the brown trout decided to evacuate from the area.  The Vivarelli reel comes in handy at times like this, all the loose line was whizzed up and your faithful blogger rose to take some running exercise, accompanied by Henry, as we ran down river a little way to keep on terms with our precious quarry.  A little later we had the trout in the long handled landing net and on the unhooking mat brought for such pleasant exigencies.

It went back well, accompanied by whimperings from Henry because he still cannot understand why the fish are not in a neat pile on the bank, like pheasants are in winter, but instead are gently released and allowed to "escape"(?)

Keep your eyes open for those signs that things are changing and respond to the changes.  It makes for a great deal of satisfaction.  It also indicates that you are in tune with your surroundings.  You are attaining that elusive "resident" status.  You are reverting back to your natural state.  You are Homo sapiens sapiens the innocent predator and you belong right there on that river bank!