Easier than it looks...

Rushed out late this evening forgetting the camera so had to revert to the telephone, please forgive the poor quality of the photographs.  You might enjoy this peep at a very fish-filled spot.  Some of the places where the fish rise here are very difficult indeed to get the drift just right.  Others are much, much easier than they appear to be at first glance. 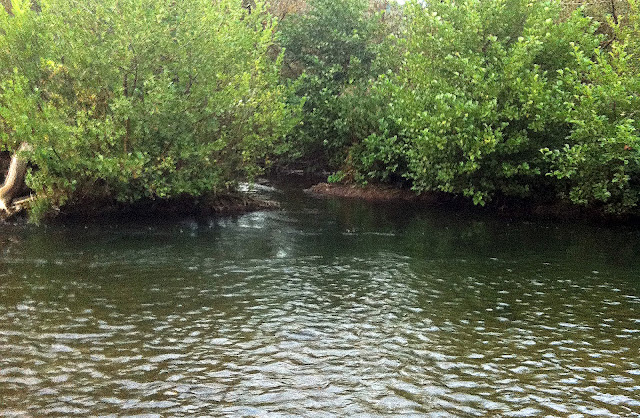 It is no exaggeration to say that there are hundreds of fish in the area covered by this snap. 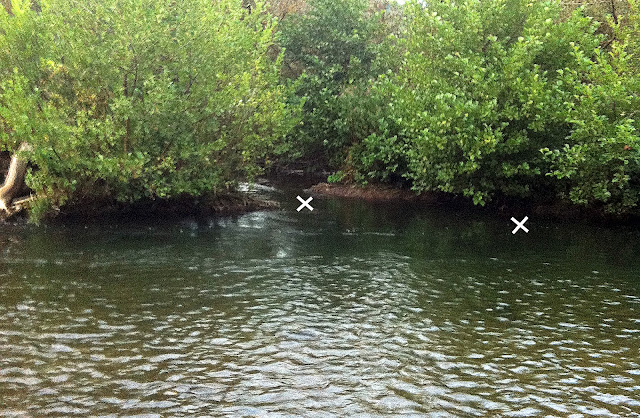 Here is the same spot with just two places identified where good fish feed when there are flies on the water.  The X on the left is where fish take up position in a current that flows from the back of the picture, through the gap between the islands and towards us, where it joins the main river current that is flowing from left to right in these pictures.  The X on the right is a place where the fish also hold up under the overhanging vegetation in a current that flows more slowly than the flow right next to it between the fish and us.

Amazingly they are not hard places to present the fly into.  This was only discovered by ignoring what appeared to be great potential for drag whipping the fly out like a trick water skier going for speed across the water and simply having a try.  All that is needed is to throw a long leader abruptly up the gap between the islands so that it falls in a pile, rather than turning over nicely.  The fly drifts naturally for several seconds and the rising trout will eat it if the fly seems to be the same as the real flies it has already been snaffling.  To present to the fish at the right hand X all that is needed is the same overpunched out cast but this time cast to the right hand edge of the gap so the leader again falls in a similar pile and gives a similar several seconds drift before it is dragged away.

Here are the results. 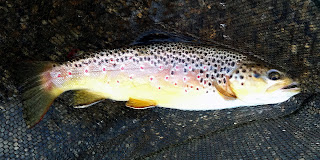 Two strong Wild Brown Trout.  The first came from where the X is in the gap between the islands.  It was a real bruiser of a fish that fought very hard, taking the fight all round the pool.  It would have been lost if it had not been quickly bullied into the open water rather than trying to fight it in the gap between the islands amongst all the tree roots and other snags.

The second came from the overhung spot marked by the X on the right.  It was longer than the first trout but not as strong and seemed a bit on the slim side compared to its shorter but stronger rival.  They both succumbed to the PPS.  Both returned whence they came with no problems.

Ironically, some of the nearer places in this pool are much more difficult to fish than these two "X marks the spot" places...