A week away from home was pleasantly spent on the waters of the river Dee in Aberdeenshire, Scotland. 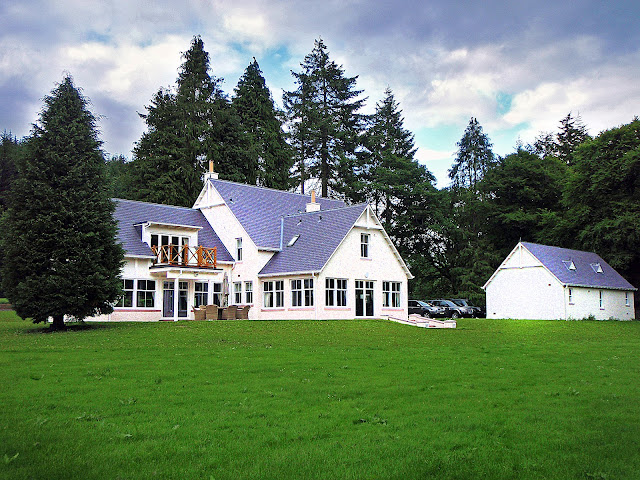 The accommodation was amazing!

We had three beats to fish: Dess (a big, glorious place); Woodend (delightful with a long channel that meanders from one side of the river to the other); and the Cairnton water (where A H E Wood invented fishing for salmon with the floating fly line).

There is sadly little to tell from my own fishing, being unable to stay connected to a salmon for more than a few seconds all week, but my colleagues and friends all caught either salmon or sea trout during the week.  Guess what your faithful blogger caught? 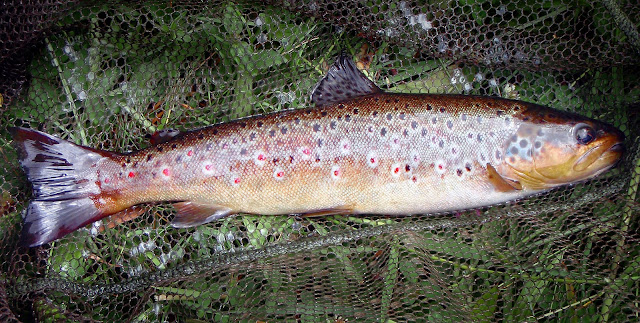 Yes, trout made light of my flies no matter what size I swung around in the Dee's powerful currents.  A photograph was made of the first trout as a reminder that small fish will eat quite big items of food.  Well they do judging by the size of the fly this one attacked, a two inch aluminium tubed affair of squirrel tail dyed ultramarine blue.

So it went on.  Trouts of tiny and moderate size seemed only too keen to be caught by this Sassenach. The 15ft Sage "flagpole" was even forced into a bend by one plucky two pounder, which was caught on the Wednesday night.  It was shaped with a very rounded cross section, reminiscent of a mackerel.

The salmon, on the whole, steered clear except for one at the tail of a pool called "Russel" on the Cairnton beat, which took a Tosh on a size 12 low water double, set off back down river for the thick end of twenty yards, rolled on the surface so I could see it was probably into double figures and then just seemed to let go.  The line fell slack and I kept my comments limited so that I would not burst into tears.  Later in the week, on the same beat, in the middle of a pool called "Ferroch" the fly was being held for a few seconds on the dangle with the end of the fly line about two feet from the left bank there was a sudden screech from the reel then a silent pause only broken by my saying out loud "Don't Strike!" and then another slightly longer screech then nothing.  All had gone slack and I "knew" that this holiday was going to have me watterlicked as far as migratory fish were concerned.

To tell the truth I fished on in as focused a manner as possible, only finishing on the Saturday night at 23:50 to both give it a full go and ensure I did not, inadvertantly, fish on the Sabbath...

Regular Rod's Manifesto for Catching a Salmon on a Double Handed Fly Rod (Eventually)
I learned a lot (the hard way).  Next year will be better for me.  I will go for more casting lessons and practice the art until proficient.  I will tie more flies in the variety of sizes needed to cover all water heights and conditions.  I will equip myself with a variety of floating, intermediate and sinking lines and leaders.  I will not quit.

Now it is time to get back to Dry Fly Fishing, where I can still kid myself that I understand what is going on....