This is a corner on my local river that others have named "Heartbreak Corner".  It's a ludicrous name.  The fishing here is as hard, or as simple, as anywhere else on the river.  Nevertheless, it always manages to teach me something whenever I visit there.

Three things could easily lead to failure on this long bend.

It is usually approached on the inside of the bend.  This means that the water will be flowing more slowly on the angler's bank, where it is shallower due to gravel and silt deposition, than on the far bank where the water is deep as the stronger flow has scoured the channel deeper.  The surface currents are different so drag has to be controlled, or else the fly will not drift naturally, the fish will ignore it and heartbreak could be the result.

One of the three basic principles is frequently broken here too.  I have seen anglers standing up next to the water, sometimes wearing pale hats (even white) whilst they cast, and cast, and cast.  Heartbreaking!

On many days there will be multiple species of flies drifting through here.  It is easy to see one sort and decide to start fishing with a representative of that fly.  If the fly chosen is not actually the one that the fish are preoccupied with then you can have your heart broken as the fish rise, whilst you cast, and they rise, and you cast, and they keep rising and you keep casting thinking "I just need to get the fly to land right and I will catch him!"  Unless you stop, look hard and watch for the flies actually being eaten then you will again have your heart broken... 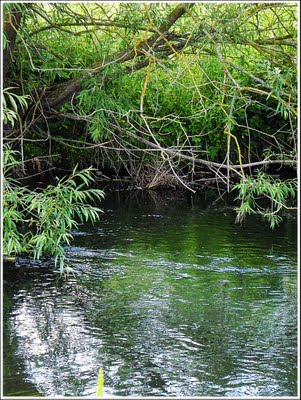 On this bend is a superb hidy hole.  There is nearly always a good fish rising under the branches and twigs here.  There is a gap.  I know it is possible to get the fly in through that gap.  But there is a tree behind the kneeling position and it is just at exactly the distance to catch the fly on the edge of the back cast.  It means the trajectory of the cast has to be made at an angle to avoid the tree behind and then a mid-air mend made to get the fly travelling in the right direction to land in the hidy hole.  I've managed to get the fly in there a few times but it never gets in there far enough and with enough slack in the tippet and leader to drift over the fish convincingly.  It is downright heartbreaking!
Long may it be so!  Dry fly fishing should be a meritocracy!  Someone better than me will manage to cast in there and catch that fish one day.  I hope the tree behind is never felled...