You have to speculate to accumulate!﻿﻿ 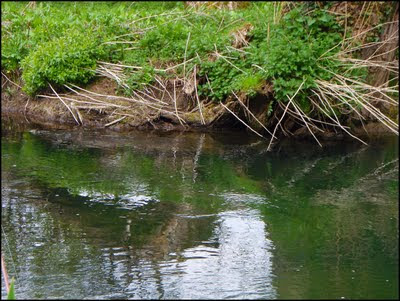 Take a peep at this little vantage point, hard up close to the opposite bank.  A nice overhang that prevents attack from above.  Some stalks from last year’s nettles that act as a comb to comb your fly and tippet away from the occupant.  It is a good place to live and a good place to try a cast and presentation into.  The risk is that the fly will hook up on the dead stalks and even if you get the fly back, the fish will be off his food for a little while owing to the disturbance of a fly behaving in a very odd way overhead.


The trick here is to cast so the leader is upstream and the tippet is laying downstream in advance, but you must get the fly right up close to the edge, within three inches to have a real chance.  To make the leader fail to turn over you can extend the length of the tippet where there is room to deploy it and it will fail to turn over nicely.  Here the angler is surrounded by vegetation and trees behind so the lengthened tippet is not an option.  The way to make it fail here is to deliberately put extra force on the forward cast and the leader will fail to turn over fully.  To avoid scaring the fish with a nasty hard landing, aim the cast upstream a little more than you would normally and cast as though the water is actually up at shoulder height.

You only need the fly to drift into the fish's hole for a couple of seconds.  Manage that and bam!  You have the rise and the rest is up to you.  Of course if the fish doesn’t take the fly then the dead stalks will.  It is indeed “Risky Business”...