This story is true and I'm only telling it now because of a recent, poignant post about getting old, from a blogger whom I respect...

Some years ago now, I met a very nice old chap, George and over time we became friends.  He was a wonderful old man who fought in WWII for King and Country, in tanks, and became a judge in civilian life until he retired.    I learned from him that he used to love going fly fishing but lamented that his legs were no good on rough ground so he had given up his beloved sport.  I knew a place where the river bank was as smooth as a garden lawn and the fish were abundant.  So I persuaded him to come with me for a few hours.

On the Autumn day appointed we arrived and there were fish rising nicely.  He managed well leaning on his walking stick with his left hand and casting with his right.  Through the morning many fish came to his fly but he was out of practice and couldn't connect with them.  At luncheon I apologised that he had not yet managed to catch a fish.  He wouldn't have any of that.  "Goodness me, I haven't seen a river for three years.  This place is glorious.  It's a joy to be here regardless of catching any fish!"

After our meal I took him upriver to another spot where he wouldn't be able to wander but he could stand behind a thick hazel bush unseen by the trout and make his cast.  First cast a fish seized his fly and my pal connected well.  I was delighted (and relieved) to land it for him. 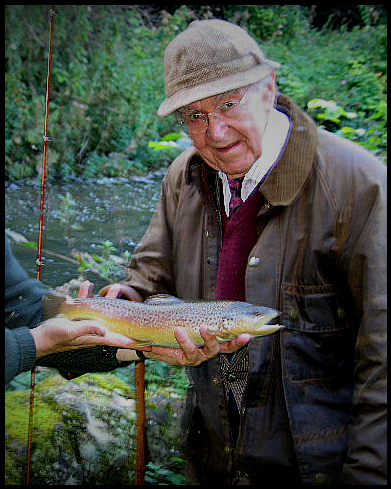 Just then another friend arrived with a new camera and was in time to photograph us with the trout.  "Do you want to keep him George?"  "No!  Put him back please."  So back went the trout and we went back home.

With his confidence boosted, George agreed that we should make another trip the following year.

It was not to be.  That winter George was victim to a stroke.  He worked hard at getting back to normal.  He was a pretty strong cruciverbalist.  He lost none of his skill.  His faculties were in order but his body was not completely his to control anymore.  All that summer, fishing trips together were joyfully planned and anticipated and then sadly cancelled.  George was summoned from this sublunary abode before he could fish again.  That trout in the picture was his last fish.


Please miss no opportunities to enjoy doing the things you love...