Here's a couple of situations of which similar ones you will very likely come across whilst dry fly fishing.

The first one is DRAG!

Here is about the most simple example and the fix is also simple.  Fancy casting is not needed when all there is to consider is one very strong and fast current under your bank and next to a weaker and slower current further across.  The pictures show it better than I can write it: 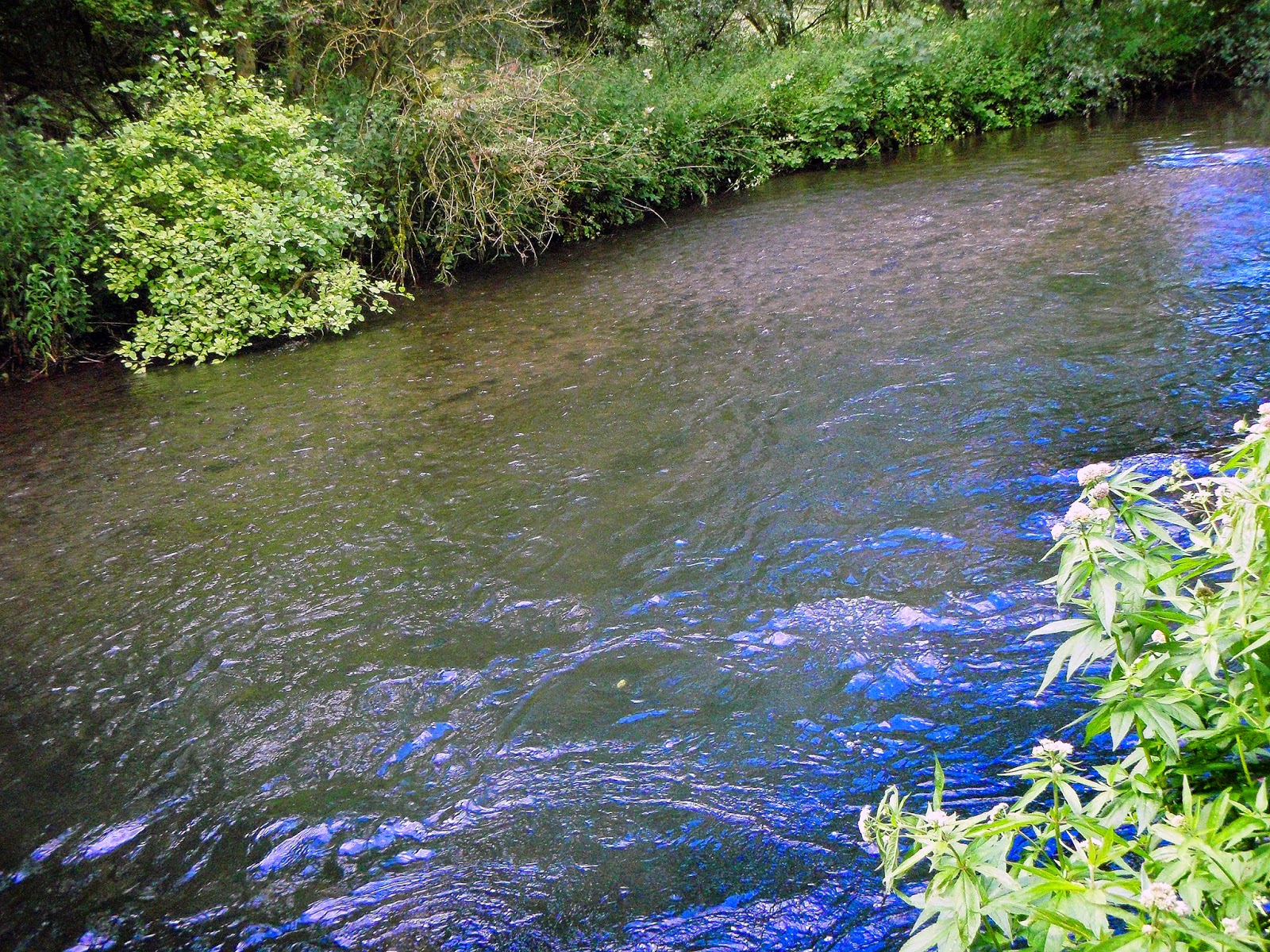 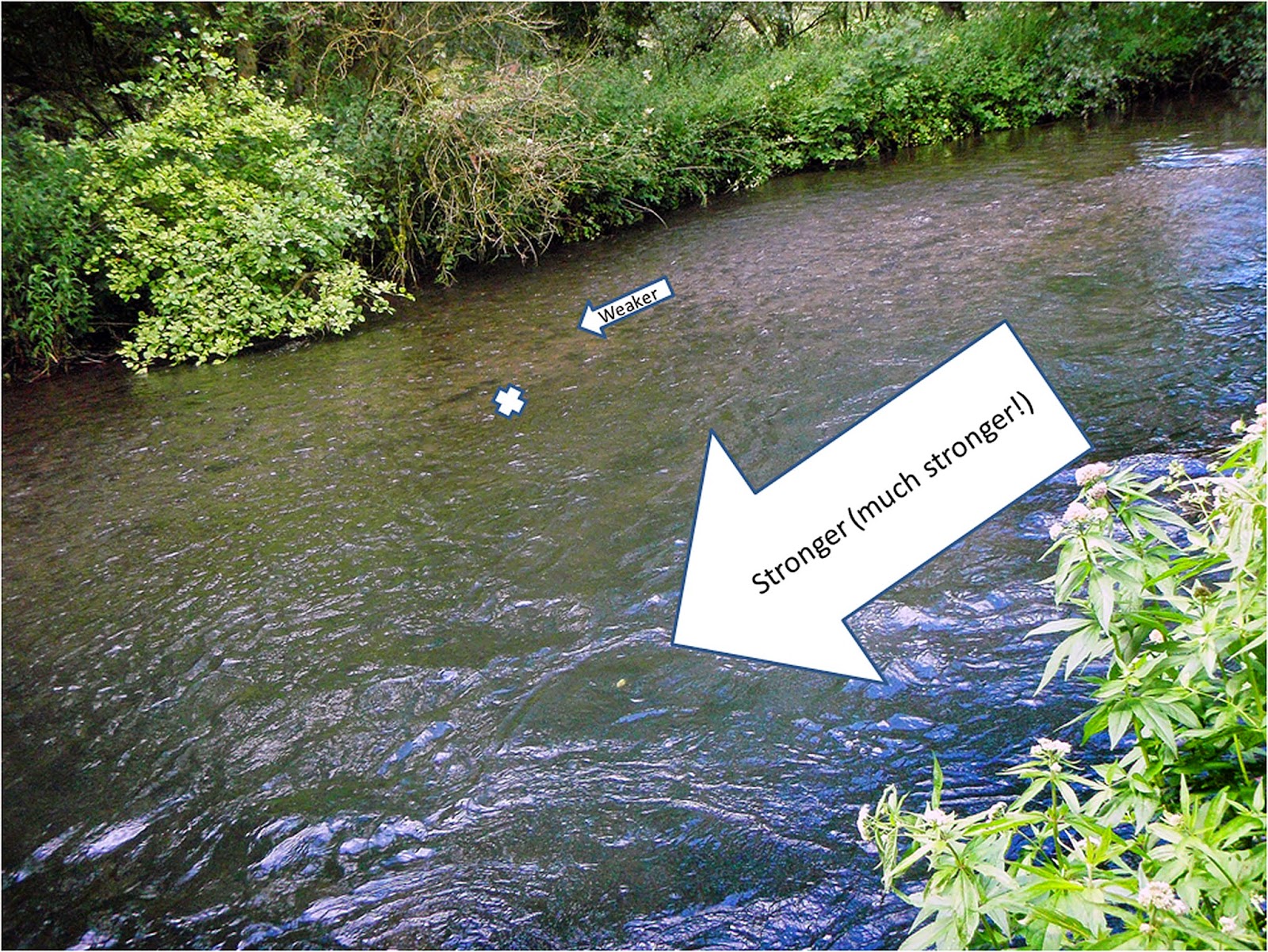 As usual the "X" marks the spot where the fish are.

The remedy was very simple.  All that was needed was an extra long tippet on the end of the leader to make the distance between the fly and the fly line just over 6 yards.  Make the cast to land well upstream and to make sure the leader fails to turn over put a little bit too much force in the forward cast.  The fly lands over in front of the fish and the leader lands in a rough pile, upstream, partly in the stronger current and partly in the weaker current.  This gives you a few extra drag-free moments of your fly drifting dead stick over the trout.  Usually the trout will eat the fly and then your sweeping strike takes up all the slack line and sets the hook!

The second little puzzle was about obstructions...  Again it was very easy to fix. 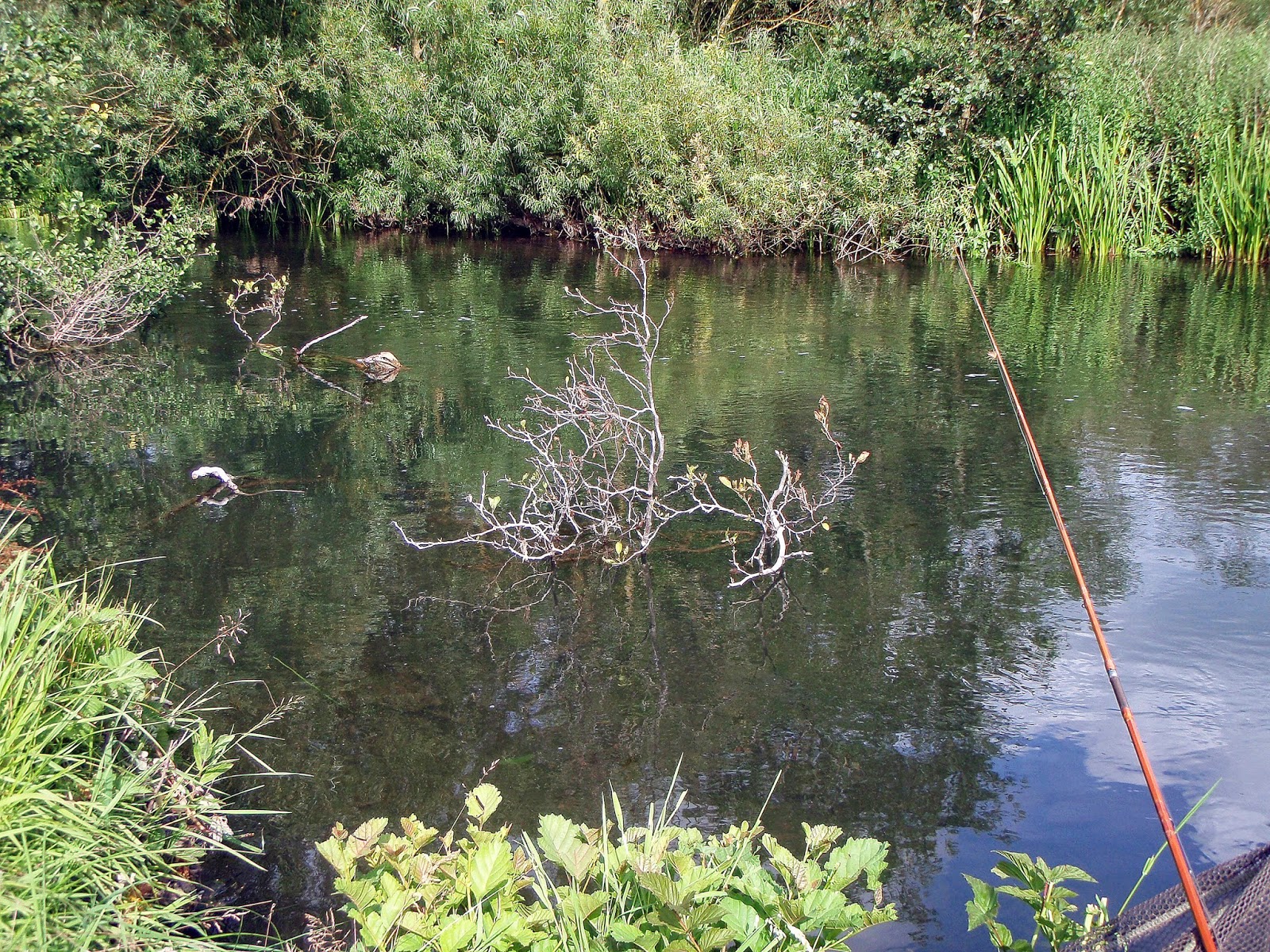 In the past it was normal to creep up to this run and, while almost laying down, cast across to the fish rising in that line of bubbles in the feed lane.  This winter we had some extra powerful storms that left trees and bits of trees in the river.  One of these has ended up right between us and the fish, lots of twigs and small branches waiting to claw our line out of the air and break our hearts in the process. 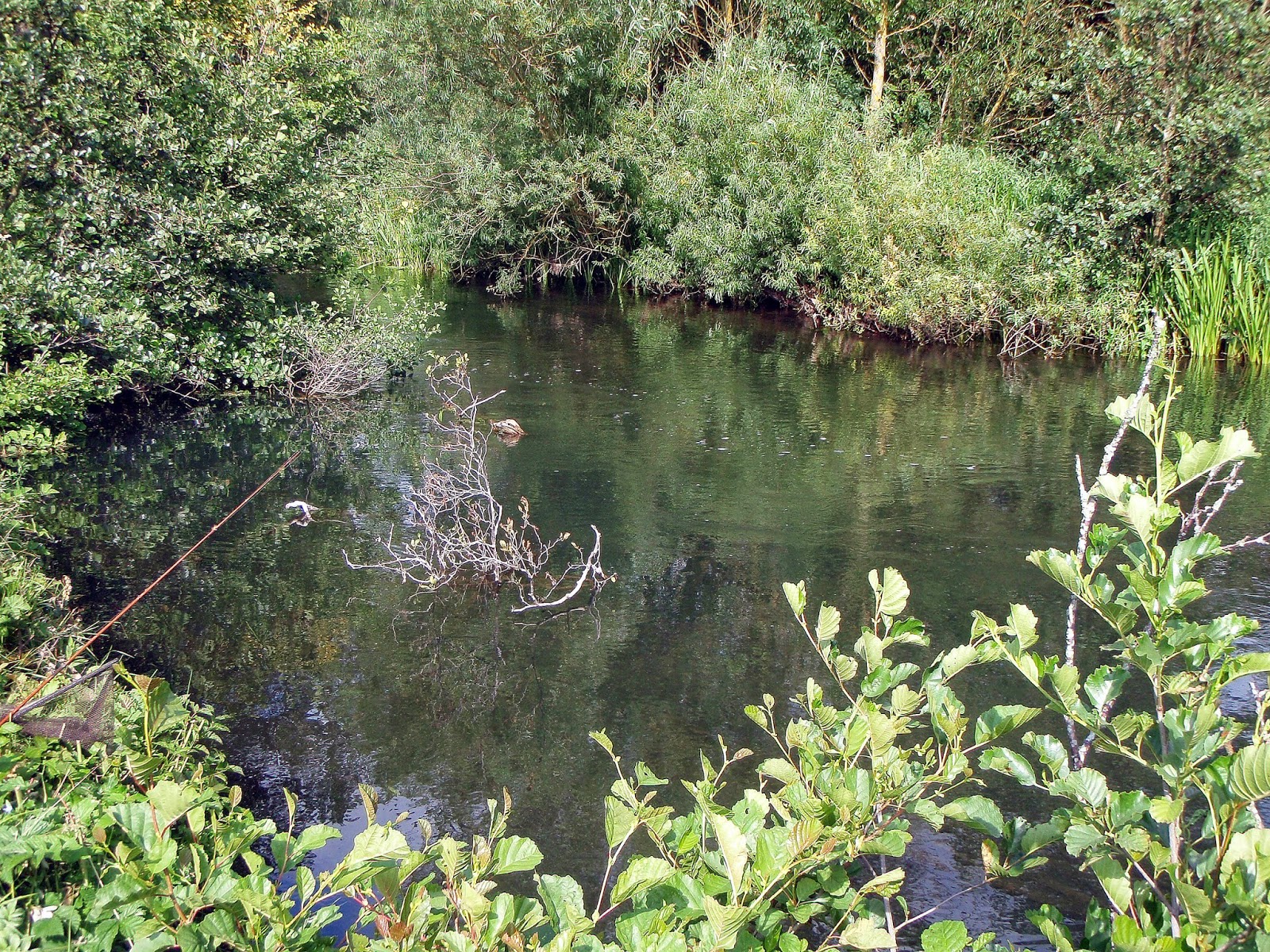 How to fix it?  Break the, usually desirable, habit of sitting or kneeling or laying down to cast.  Move a few yards down stream and this time stand(!) to cast, at an angle, a little further up than before and so reach the fish.  It is possible to get away with standing in this instance by virtue of being further away from the fish and also by hiding behind the leaves of the alder growing conveniently just where we can get a clear cast to our chosen quarry. 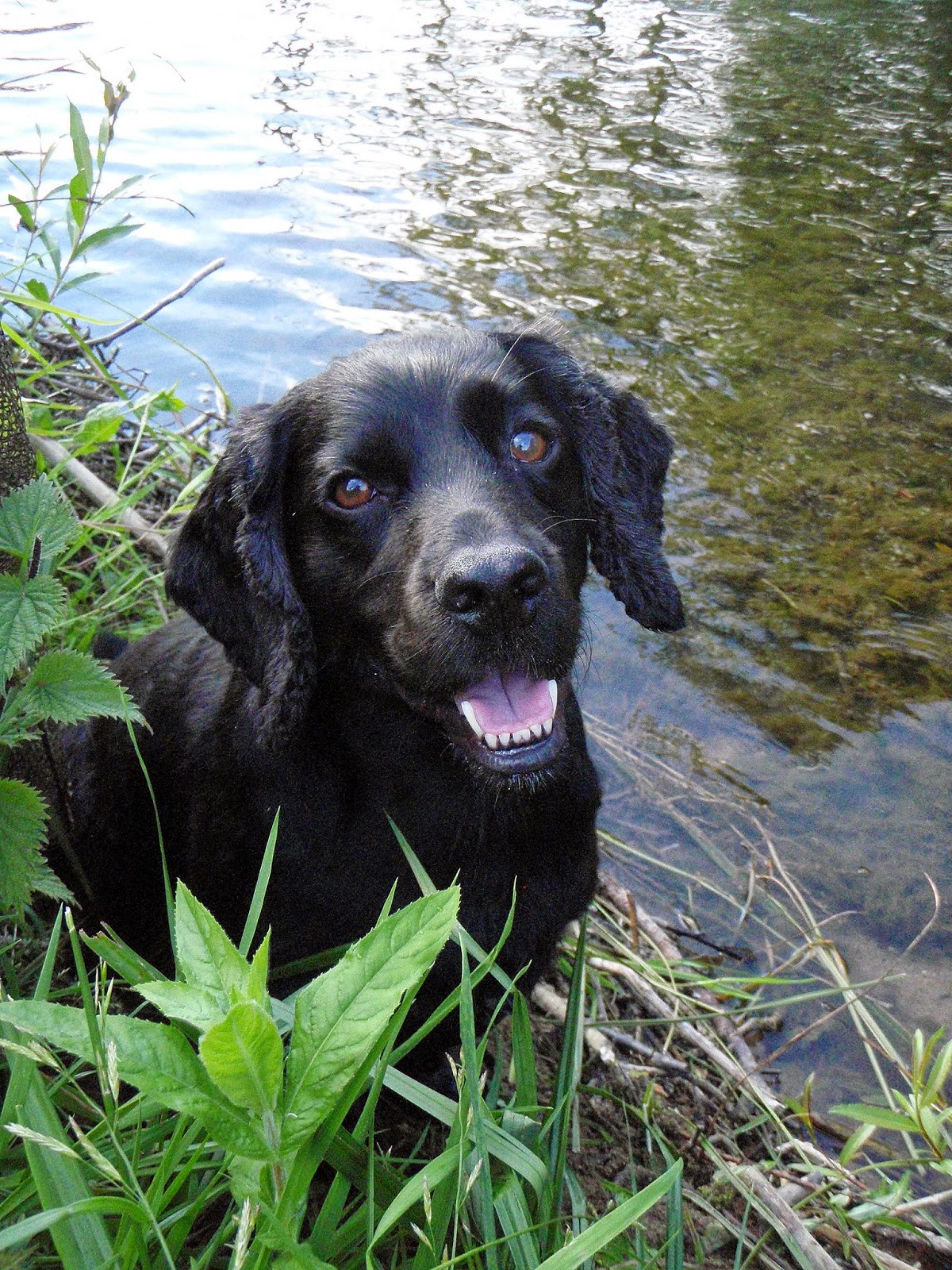 It was a hot sunny day yesterday afternoon and rising fish were at a premium.  Plenty there but they needed finding and opportunities like these two just couldn't be wasted.  Certainly not with a task master like Henry, grumbling whenever there seems to be nothing happening.  He likes action and lots of it!