All Work and No Play?

A few hours of reconnaissance in Duck Holds Wood saw your faithful blogger making some photographs on film.  The process of setting up the tripod and so on meant that attention to Henry was intermittent at best.  Henry, finding himself out by the river and in a wood simply went to work.

Having no toys of his own, Henry now assumes all "prey" belongs to his pal, your blogger.  It was with some delight, after making an exposure then turning to see where Henry was, that I found him to be sitting patiently behind me in the sit position holding up a tennis ball for me.

The hand was held open beneath his jaws.

The ball was dropped into the waiting hand.

A rub on the chest completed the sign of approval.

Off we went to the next place to catch the photographic eye.  The exposure made and the turn repeated to find once more the Cocker Spaniel in waiting pose with another tennis ball!

and so it went on. 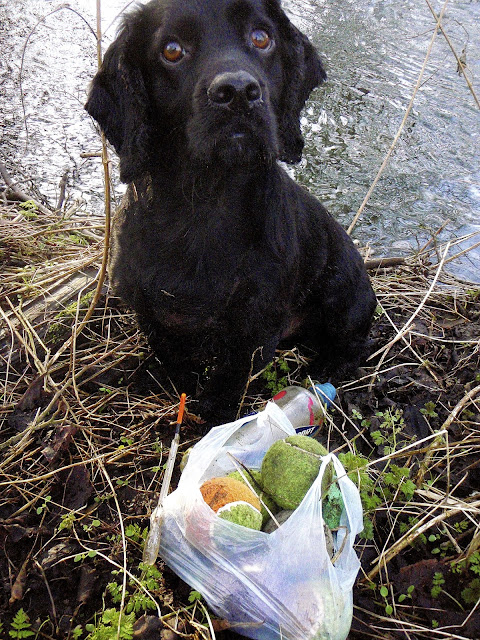 Twelve exposures were made in the few hours we were out, during the course of which, ten tennis balls were delivered, along with a poacher's float and a discarded drinks bottle.

A dog's dung bag had to be pressed into service to carry the hoard back.  It seemed to satisfy Henry that at least he had been able to put the time to some good use whilst his adopted father simply wasted his time by standing still for ages and fiddling with gadgets...