Forgot the camera again!  I must stop rushing about...  Sorry again about the quality of the 'phone photos! There were spinners drifting down river as I came out of the garden door and fish were eating them steadily.

Henry was pretty good but got incredibly excited when a brown trout dragged me all over the shallow pool we were fishing. Six or eight inches of water makes for trout acting like Bonefish and side strain is not only your friend but against such boisterous fish is also your only chance of success. 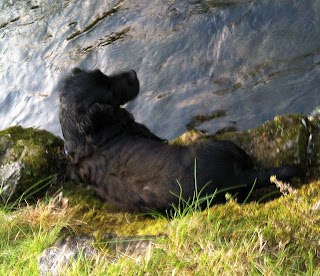 He was rather puzzled when the trout was safely released after such obvious hard work by his pal to get it in the net.  He spent a good few minutes searching the water to see if he could help me by finding it again!

A splendid evening in despite of it being only a couple of hours long.

We will soon be reaching that time when the Sport is centred on the hour or so before and the three or four hours after noon, so make the most of these short evenings while you can.  I reckon a fortnight at most is all we have.  Fishing will need a scive from the middle of the month until the end of the season to be sure of Sport.