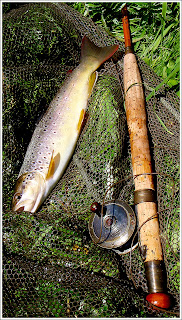 Today was James Ogden Day.  On June 5th 1865 he proved to the Duke of Rutland's Steward (Robert Nesfield) that his artificial floating flies would "kill during the Drake".  From then on the rule was made, for the first time anywhere in the world, that on the Haddon Estate single artificial floating fly only was to be used, making the very first dry fly only fishery.
Ogden was a brilliant innovator and astute business man.  As well as creating the first flies designed specifically to float, he created the Invicta, introduced a creel strengthened so that a man could sit on it to fish and so keep low and out of sight from the fish, devised and sold folding landing nets that could not tangle and (my favourite) he introduced the idea of using a short fly rod, instead of the customary 11ft to 16ft rods that were normal for fly fishing in those days.

Today I used one of his rods from 1880, it is 8ft long in built cane and is called a "Multum in Parvo" roughly meaning "much in little".  The first fish today was a nice little brown trout that Ogden would have been familiar with.  The second he would not have been familiar with.  It was a wild rainbow trout that had the 130 year old cane hooped over for a few hectic moments. 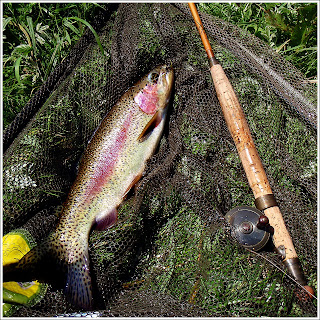 All in all, James Ogden Day turned out to be a cracking day for fly fishing and his old rod (and reel) were a joy to use.  (Well the rod was, the reel was terrible...)
Regular Rod
Posted by Regular Rod at 23:19