In Victorian times, whenever a situation was becoming burdensome to a lady, it was quite acceptable for her to have a touch of the vapours, swoon and "faint". This would immediately bring the awkward situation to an end and simultaneously win her the prize of being the centre of everyone's concern for her well being.

Here's another puzzle, this was from last night's short session with the PPS after the spinner eaters and it was solved by "fainting"... 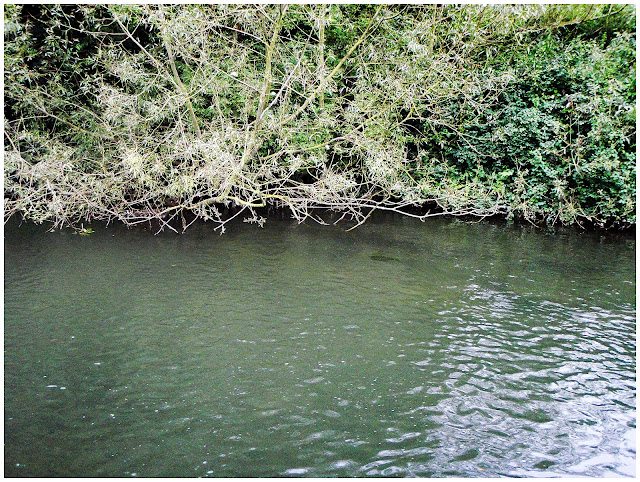 Across the river is a slack current, the head of which is nicely protected by a willow's branches. Therein a trout was eating spinners with impunity.  Between the trout and the angler is a strong current that whisks the line away promptly and so drags the fly away from the feeding trout.  Throwing a snaky line has no effect as the current is so swift the whole lot gets dragged in less than two seconds.

The remedy was to get opposite the feeding fish and cast the line with what would normally be excessive forward force, abruptly stopping the line so it falls into a swoon and faints into a pile of leader and tippet.  The line is dragged away instantly as before, but the leader and tippet, if long enough, are straightened out taking just sufficient time for the fly to have drifted at the speed of the slack current for a few moments and to trick the trout into rising for it. 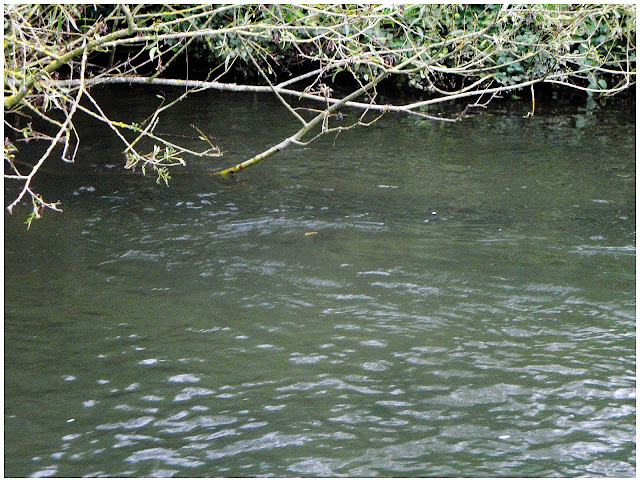 The trout was just behind where that willow shoot is diagonally going down into the water.  Getting the line to swoon and faint into a pile here was not easy as the overhanging willow stems meant that the line had to be cast with a sideways, chopping action to get under the willow and it needed to be done with quite a bit of force to make sure that, when the line was abruptly stopped, the leader and tippet would still fall in that vital pile, even though it was not being delivered vertically, which is usually much easier to do. 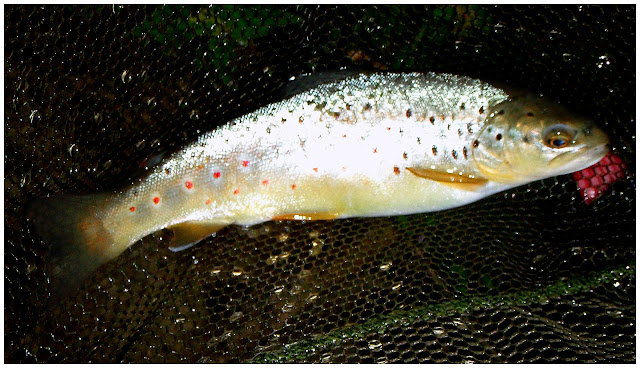 The reward was a lot of satisfaction and a smallish, but lovely wild brown trout whose headquarters really should have been impregnable.  Forgive the bleached out photo as the flash went off and it would not have been kind to mess this trout about anymore with another snap...
Is there ever such a thing as an uncatchable trout?
Regular Rod
Posted by Regular Rod at 14:39