Not Elysian fields by any means, but when the crowds of visitors have gone home the Sport in Bakewell can be a pleasant diversion for the last hour or so of the fishing day.  One of the many advantages of living right next to the Derbyshire Wye includes coming across a Brother of the Angle, who might even be glad to see me!

Mick Martin (Trugg) is a familiar sight on the river and as well as being a Brother of the Angle, he is also a Brother of the Blogosphere.  He was pleased to see me tonight as he was attached to a fine rainbow trout, which had decided it wanted to be elsewhere.  He was just engaged in negotiations with this fish so far as getting it to come back upstream after it had taken a short trip down river on the wrong side of one of the bridge supports.  The rod, a rather lightweight little toothpick in blonde, built-cane, was being sorely tested.  Negotiations had reach a standstill.  The fish wouldn't come up river anymore and Mick wouldn't let it go back down river.  Stalemate?  It was a pleasure to pick up Mick's long handled landing net and reach down behind his fish and gently envelop it in the soft meshes. 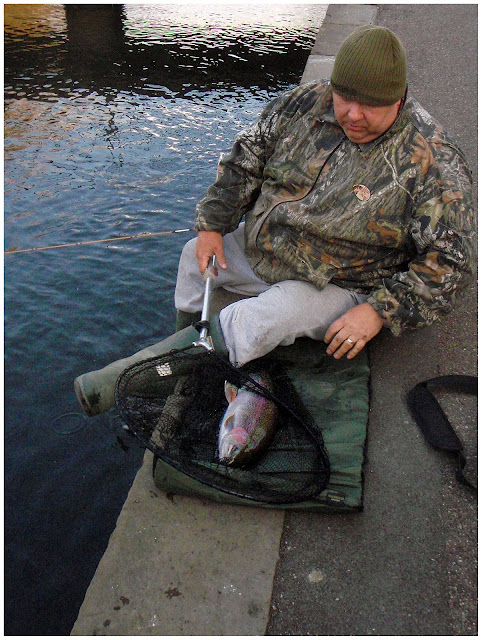 Mick had come prepared to protect any fish he caught in this hard paved area, his unhooking mat ensured the trout had as comfortable a time as is possible out of water.  Whilst he attended to hook removal, I took the opportunity of snatching a couple of pictures for myself and one more for Mick with his own camera.  The rainbow was gently lowered back where it lived and in a few moments was back in mid-river. 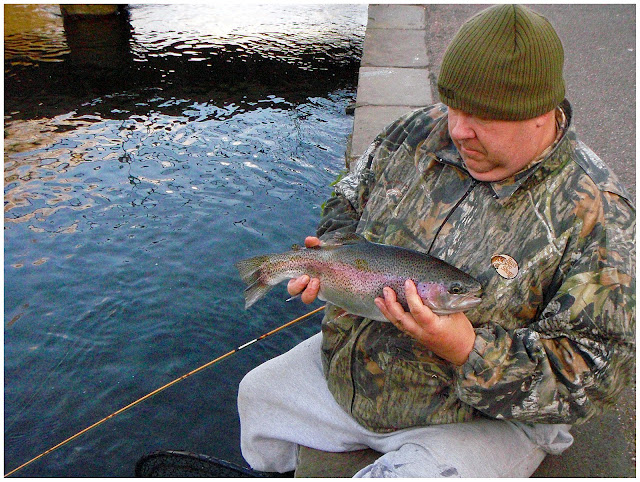