The motivations for going out to fish even when conditions are not as good as we'd like them to be are varied.  Ego might make us want to prove, even if only to ourselves, that we can catch fish no matter what the conditions are.  Maybe we have only got a limited opportunity to fish the river and we have journeyed long and far to get here so the last thing we want to do is give up and go home.  Or else it might be that we are fed up of things getting in the way of having an hour or two on the water and so we will fish, right now, no matter what and if we catch nowt then so be it!

Even when things are not ideal, the dry fly angler can still find Sport, although it will be less abundant.  Abundance or short commons it matters not when the mood is: "I've got to fish and I'm bloody well going to..."

Yesterday my Mother river, the Derbyshire Wye, was running high and still on the coloured side, but not as thick as it has been lately.  The very welcome rain has percolated into the water table and coupled with the usual surface run off, this combination has raised the water to a pleasing traditional early season level.  This in direct contrast to the two previous seasons when the river opened for trout fishing with water levels more typical of high and late summer.  The picture below illustrates this.

The dark water over rocks and vegetation in the lower left foreground is where I sat this time last year to cast up into the two currents that funnel into the neck of this bend.  No chance to sit down there right now.  It really will be summer before I can hide there, below the skyline, sitting crosslegged like a cub scout by a campfire.

The tactic for the three, post-meridian hours was simply to look for where there might be fish rising.  Flies were out in plenty so it was a case of looking for where the fish would be prepared to feed on them.  The breezy conditions and low angled sun made getting the artificial onto the right spot, controlling its drift and seeing it just a little harder than usual.  The flies were Large Dark Olives with some smaller olives that I think were Olive Uprights by their paler grey wings. No matter, the Grey Duster on a size 14 hook proved itself to be ideal for the job.

This spot that you might have seen in an earlier post had a few fish lined up and rising well.

Just to the left of this picture is the place the angler needs to be.  There is a snag though.  The ground is not firm.  In fact it is a bog!  Last season an angler stood there for too long and he had to be towed out with a rope under his armpits as he had not realised how deep he was sinking.  He was in past his waist by the time he realised he needed help.  Mobile 'phones can be a blessing!

In a bid to encourage anglers not to engage in their own, similar episodes the keepers have laid brash of alder branches over the dodgy area.  I thought the brash might be just what I needed...

It was.  By treading as lightly and as quickly as I could I reached the brash and...

Perfect!  The brash wasn't sinking, it supported my weight, my head was below the skyline and the fish did not stop rising.  The only time I was at risk was when I had to stand briefly to reach over the reed mace stems to net the fishes.  After releasing each fish, the trick was to sit down immediately and work the feet up and out of the sink holes they had started to make.  Then attend to fly drying etc. in readiness for the next cast.

The reward was two or three brown trout, and another couple of wild rainbow trout, (one of which I just had to snap for a keepsake, it was so lovely) and then an out of season grayling came to the net.  I regarded this as a sign from above to move on in a timely fashion.  Easy fishing, even if it lasts only a few minutes, can easily lead to a lack of restraint.

I wandered on up river, fishing my way home. 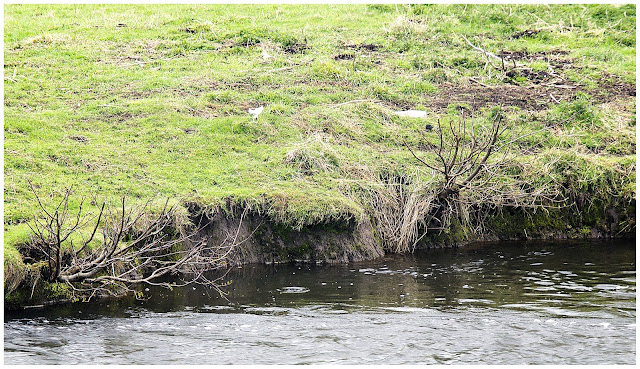 There was an attempt at the big rainbow trout that was rising the other day in the eddy by the side of the dirty water (I was on the opposite bank from where I took this photograph the other day) but as he took the fly my line was dragged into the branches of the little bush on the left of this picture, which impeded the strike and the Grey Duster was lost in the roots of this important little bush.  Important because without the bush's roots there would be no little promontory and no wonderful eddy here.  A fresh fly on and another attempt at a brown trout rising an inch from the bank proved more successful.  I was just thinking of packing up when a very good friend appeared on the opposite bank, with his dog Purdy, who just happens to be Henry's half sister (they had the same mother).  So packing up was the right thing as we had some catching up to do and home-made biscuits and tea to consume back at the house.

On reflection, a number of small things added up to success, in despite of the less than ideal conditions...

Reconnaissance through the winter had indicated where to look for rising fish during breezy, rainy, high and coloured water conditions.

The waterproof overtrousers let me stay low by sitting down to fish.

By deciding to fish no matter what, I just so happened to be there at the right time.

The Grey Duster, on the right sized hook, is a brilliant fake of the Large Dark Olive. 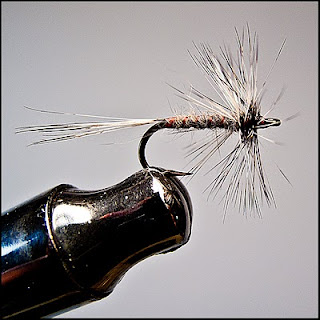