We are experiencing a slow start to what we euphemistically call "Spring" round here.  Each day seems to give us moments of promising sunshine, but for the majority of the daytime the cold winds and mainly heavy clouds have kept things dull and cold for anyone not wearing some insulating layers.  It has had an effect on the flies and on the fish.  There is good sport to be had all the same if you stay alert to the changes throughout the day, as well as hanging around as dusk approaches because even in cold conditions some flies will be there and sometimes the fish are happy to feed on into dark.

This Saturday your blogger and Henry his pal took a casual couple of miles down to Duck Holds Wood.  There had been hawthorn flies in abundance over the previous two weeks but on this Saturday morning there were very few to be seen and none were crashing onto the water.  Nevertheless, trout seem to be aware by now that black flies on the surface make good meals but these flies have to be grabbed quickly as they have a tendency to recover their powers of flight and get away so... they hit them and they hit them quite hard.  So a Charles Cotton's Black Fly was put to the test.  The technique was to simply sit down next to the river where it was possible to watch the feed lanes for rises or signs of fish. 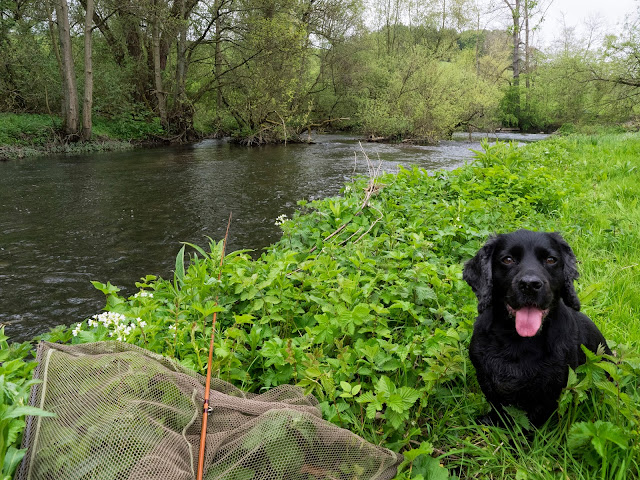 "What's happening?" Henry seems to say when, after a few minutes sitting, there are still no casts being made.  All is forgiven though as soon as he sees the rod arching over into its battle curve... 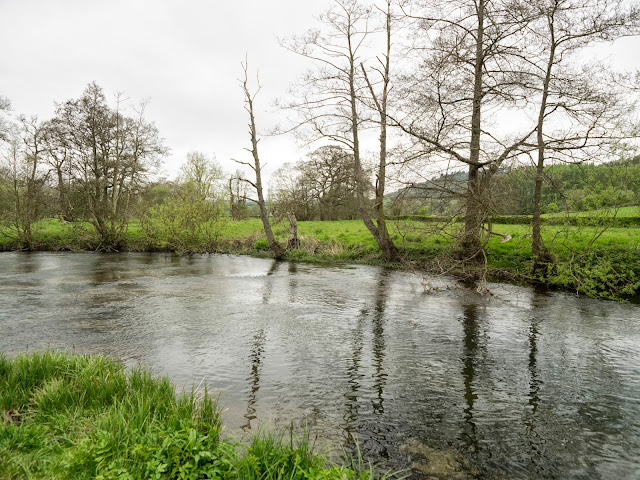 After a few hours it was time to start fishing our way up river back to Bakewell and home.  As we went along things changed.  For a start the light became quite dull.  The wind changed to NNE.  It was strong and cold.  Then in the feed lanes there were rises.  Closer examination confirmed that there were flies appearing, the fish were keen on them and so were the swifts, swallows and sand martins!  Sure enough they were that little foul weather friend of birds and fish, the Iron Blue Dun.  Now do you remember me saying that you must have a suitable fake for these when they put in an appearance or the chances of success will be greatly reduced?  I was sure I had some in my box but couldn't find them.  I hadn't stocked up before coming out!  Fortunately there was a battered example in the hat band and the fish didn't seem to mind its less than perfect condition.  So, as the cold breezes did their worst, the change was made and the sport continued nicely for another hour or so, before it really was time to go home. 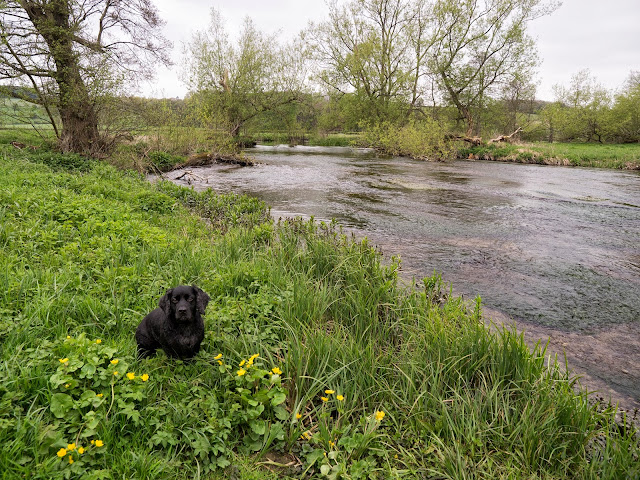 On the way back, seeing Henry among the King Cups (sometimes called "Marsh Marigolds") was too good a photo opportunity to miss.  Roll on summertime.

Click the pictures if you want a closer look.