Mayfly time, on a dry fly only water, is very important to the angler who would like to try for one of the really big trout.  Even if the quest is unsuccessful, there is still a great deal of fact to find out about the way things are going in the river.  Of course you could simply ask the Environment Agency to come and find out by electro-fishing the water, but that is a nasty shortcut and I believe is not altogether safe for the fish.  Anyway it is much more exciting to find out for yourself with nothing more than the fair means permitted and at your disposal on the fishery.

Your faithful blogger's Mother river is the Derbyshire Wye, particularly in its lower reaches.  The rules have always been very simple: no wading and dry fly only.  In 2004 the management policy of the river was changed and changed for the better as events since have proven.  Stocking with farmed fish ceased and another rule was added to the other two - Catch and Release!  The view being that at least for some years it is best if all fish were returned so that the larger fish, which were traditionally killed for the table, would get chance to pass on their genes by being allowed to breed.

The effect was almost immediate, certainly by the end of the second season there were many more trout and grayling in the river than had previously been the case and... there was a greater variety of sizes!

Now, ten years on, it would appear that the size of the fish at the top of the food chain is getting bigger, much, much bigger...

Arrived at the water and seeing a rise to a Drake (traditional Derbyshire speak for the sub imago of the mayfly Ephemera danica, sometimes the less common Ephemera vulgata) and having already tied on an EBM a cast was made. 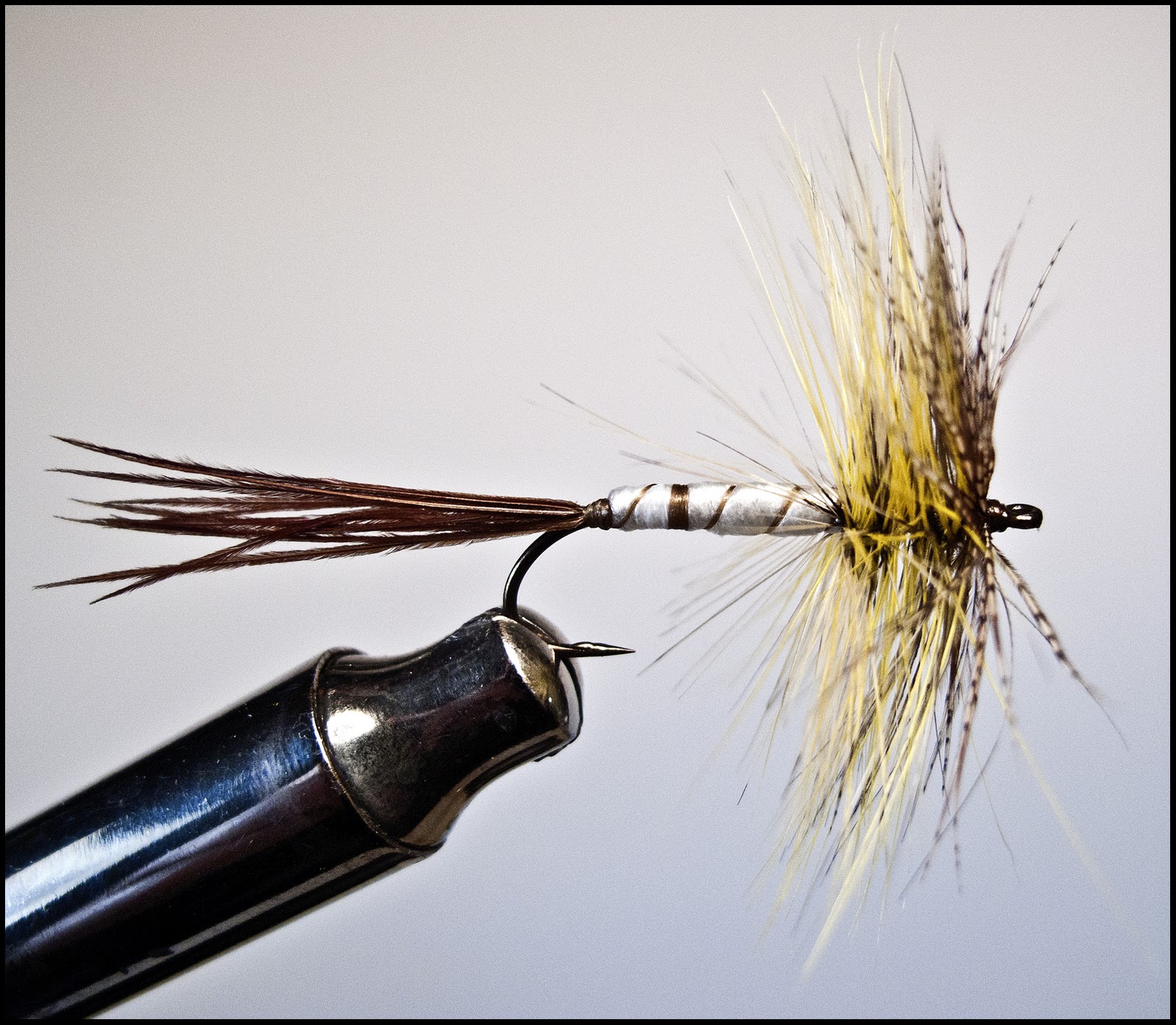 A mistake and a thoughtless one too!  The poor little trout was not much more than 5 or 6 times longer than the fly...

An immediate decision was made to leave all trout alone until it was certain that the cast was being made to those of good size, ten inches at least.  This meant that the tactic had to be to search out the bigger fish.  A few minutes watching the water led to the conclusion that all the best fish were in the edges and under overhanging branches and other vegetation.

The number of casts made in the day were constrained by the difficulties encountered when trying to get the fly under the alder, willow, hawthorn and such.  This turned out to be the best way, watching, waiting, looking for LITTLE rises to the Drake, the big splashy rises were the signature of small fish and so were ignored.  Some splendid fish were brought to the net.  Some fish were impregnable though.  Just look at these two pictures: 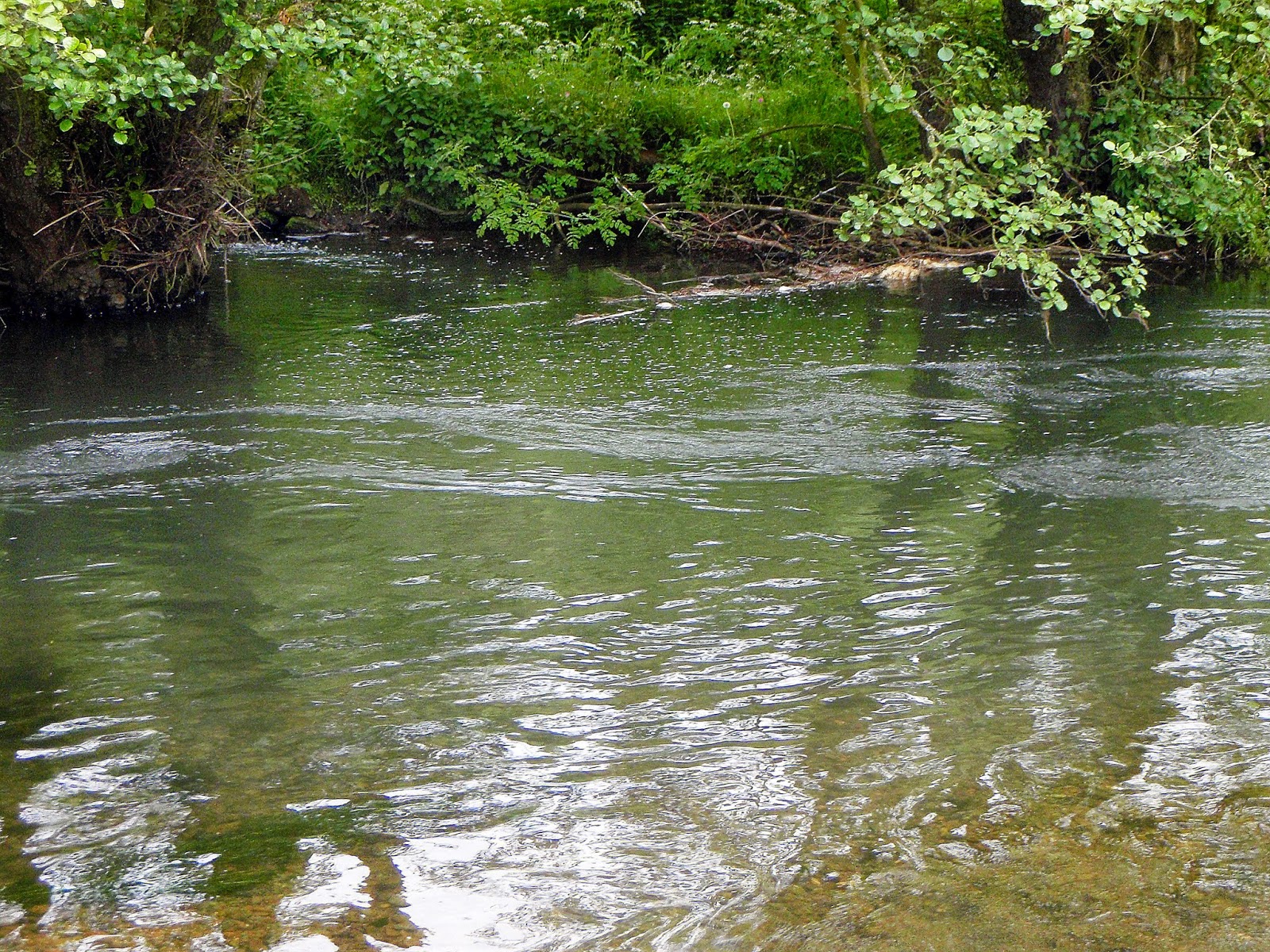 What you can see here is a feeder stream coming in near the top left of the picture.  See those bubbles and the crease in the main river flow?  This version will be easier to see what was happening:

There is a flow coming in from the feeder stream and it is being pushed to our left by the small woody debris at the mouth of the feeder.  The main current  coming directly from our left catches this feeder current and turns it down river.  Some of this flow is turned by the body of "still" water this side of the woody debris and so the whole of this is turned to make an eddy.  To add to the structure there is a degree of aerial cover afforded by the over hanging alder branch and its twigs and leaves.  There are at least ten fish feeding in this interesting place.  The largest of which I believe is the one downstream and under that alder on the right of the picture.  How many did I catch?  Not a one!  Controlling the drag was a puzzle that beat me soundly.  I love places like this and the trout that live there.  They make the river a true meritocracy and I'm sure someone better than me will have success here at some time in the future.

Onwards and upwards to further overhanging alder and hawthorn (and no, I will not illustrate the place for selfish reasons that will become obvious in a moment) and a beautiful brown trout of just under eighteen inches took my fly, which by now had been changed to a PPSG as there was a good return of spinner from just before two o'clock that the fish were seeming to prefer over the Drake.

The trout reacted in the way decent sized brown trout often do, she bore down and deep and made for the roots by her station on the opposite bank from me.  Then suddenly at great speed she ran up river.  Side strain turned her towards me then even more suddenly she was airborne!  Then she skittered across the water towards me!   As she came near it was evident what caused this "illogical" action.  There was another brown trout beneath her that was simply enormous!!!  I'd guess it at the thick end of a yard long, easily as long as my arm anyway and "built" with it too.  The water was clear enough for me to see it very well, it was bulky as well as long, which says to me that it was in good condition and thriving.  It only turned away when my net was placed in the water...

This is the second very big trout I've seen in the last two seasons (ignoring the Town fish) and the other one was only a matter of 100 yards upriver from this monster.

I believe it is due to managing the river for wild fish only and the catch and release policy that we are now about to benefit from some very exciting developments.  Of course I will be back and watching carefully, even if I never catch the giant, knowing that it is there is very satisfying.