A lovely, evening, last-minute decision to get onto the river had me sitting cross legged on a gravel bar that is usually under enough water for a dog to swim in.  This low vantage point made it easy to see the rises in profile and it was fascinating to not only work out what the flies might be that the fish were eating, but also what fish were responsible for the rises.

A few minutes in contemplation and the decision to stay with the sedge for a moment or two was justified by the unmistakeable sideways on view I was getting of what I was sure was a nice trout, as it turned to take the little lumps on the surface.  The fading light meant I couldn't really see the flies well enough to be certain they were sedge flies but they were little lumps that were still visible...

Spinners at this time are simply invisible to the angler.  Anyway the rise form looked like those to sedge flies.  The cast was successful and after a furious tussle up and down river with sidestrain dictating that the trout had to keep responding, it eventually came over the net and this fine Wild Rainbow Trout (WRT) was quickly released after a few seconds of admiration.

The other rises were noisy, almost like clooping carp but shorter sounding! These were from fish that did not reveal any sideways movement and the flies they were taking were not little lumps.  There were also several fish in close proximity to each other.

So adding up that:


The first part of the guess was that Sherry Spinners were being eaten.  The noisy rises and the number of fish in close proximity, for me, made the other part of the guess that the fish were grayling.  Trout in most circumstances prefer to keep away from each other.


There was just enough light to tie on a spinner.  The task was made harder by the tippet being the 5X that was on for the sedge fly.  I just didn't feel confident enough to take it off and replace it with something thinner that would pass through the eye of the hook a little more readily in the dark... 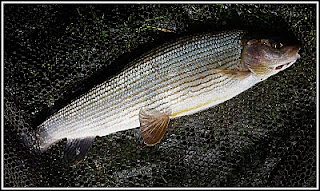 Both guesses seemed to be right and the reward was a very splendid evening's Sport with some fine grayling that, although living in a public park, are rarely fished for.