As Good as a Rest?

The prospect of fishing a private estate lake for some of our native coarse fish raises the spirits to heights of joy and excited anticipation.  This was the treat for today thanks to a good pal, Alisdair.  We raked our swims and fed in some samples of the intended hook baits.  Worms and bread for the lucky guest, with cockles being Alisdair's choice. 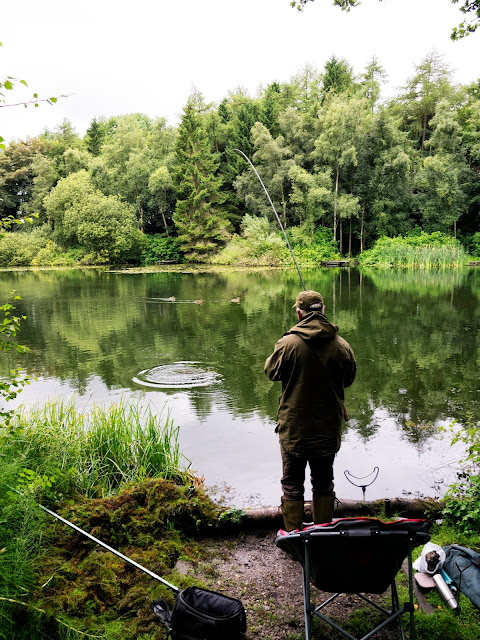 His first fish was a Tench that took some landing as it had charged through the weeds, collecting an additional payload that made netting the fish akin to some new aspect of gymnastics to be displayed at the next Olympics...

There is something very lovely about a Tench no matter what size it is.  Maybe it's that ruby red eye?

Here's another one that fell for one of Alisdair's cockles.

Your blogger fished in the way he first fished back in 1956, which turned out to be a good policy.  The rod, an unrestored Edgar Sealey Octopus Float Caster De-Luxe, was mated to the Speedia centrepin reel that used to be Grandad's. A home-made antenna float was set up to move up or down by any displacement of the number 6 shot fixed two inches from the size 8 hook.  Bait to begin was worm.  Close in to the water lilies was the place to be...

Worms proved attractive to the Perch and, being perfectly happy to catch Perch for a while, your blogger kept on using worms.  Then suddenly a different fish put a bit of a bend in the rod.  It was a Rudd.  All the while the worms had been deployed, some small samples of pinched bread were being fed in.  Here was a Rudd.  To catch Rudd instead of Perch all that was necessary was to change over to bread flake for bait.  So it proved, lots of Rudd.  The bait was increased in size to encourage the bigger fish to take it.  This worked well, with the landing net being required for several of these lovely fish.  Then suddenly...  The float sailed away, the hook was set and then the reel was screaming!  No Rudd this, sure enough it was a Tench.  A small Tench but very strong and blessed with the big paddle-like fins that reveal it to be a male.

Change is said to be as good as a rest but your faithful correspondent fished pretty hard today, using up an entire small white loaf in the process.  Guess who, after his tea, fell asleep exhausted, but very happy.