This season's Drake festivities, even though a little more perfunctory than is usual, still unveiled the whereabouts of some stunning fish.  Those of you who spent some formative years of your angling career fishing for the so-called "coarse" fishes (a silly English term referring to fishes without an adipose fin) may have found yourselves involved in "specimen" hunting.  It's a phase most of us have to go through when only a very large example of each specie is deemed worthy of our attention.  Eventually, many of us move on to simpler goals.  My goals these days are to fish as often as I may and enjoy whatever happens.

This year I espied some extraordinary grayling in the Derbyshire Wye.  Bigger than any I have caught in Derbyshire and nearly as big as "specimens" I caught as a younger man in North Yorkshire.  So maybe a little time will be expended, spent, invested, wasted... (Whatever!)  in pursuit of these splendid creatures.  I had a little try a few days ago and immediately caught some lovely grayling from the shoal headed up by the monsters I was after.  I failed with the bigger fish but had some exciting moments with the fine, yet smaller, fish that were in the sentry positions downstream of them. 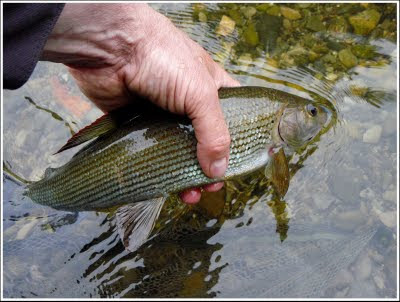 This one shot off down river as if it was starring in a bone fishing film!  On netting, it was clear that this was a lucky fish!  Can you see the scar on its side level with the pelvic fin?  That fish had escaped from the saw toothed bill of another imported alien that has no natural enemies within our shores and so reaches plague proportions quite easily and quickly...

Project fish?  Well I will have another try or two I'm sure, but without any extreme efforts.  I finished with ultra-cult a long time ago.  More frequent moments of Joy and Contemplation are my ambitions these days.